Day 30. We made it to the end of Juneathon. Well done everyone! To celebrate, the sun has got his hat on (all together now “hip hip hip hooray!”) and the weather is beautiful if a little hot for a run.

Never mind, time to go out with a bang*. 11 mile long run – done! Yes it was hot, yes it was sweaty, yes I wore my dorky cap and hydration backpack and yes there was some walking involved, but done.

And just in case you’ve not had enough of the kittens, just time to sneak a few more photos in

Off to cool down. Juneathon round up tomorrow.

* If I’m honest, it was more of a whimper

Well, a stroll around the village. What was unusual was that I managed to drag my daughter with me. It was so hot that I managed to keep on putting off my run until it was too late (because I’d eaten my dinner). So a walk it was. 1.7 miles in 34:13 on a beautiful evening with my lovely daughter. Perfect.

Gardening is an exercise activity, honestly. Well it is when you haven’t done any for a while, then what you imagine to be a ‘little potter’ becomes a full scale enslaught.

I have also spent the day finally getting to the end of my Feedly feed of running blogs. Phew!

After last night’s fantastic gig in Bristol, followed by sitting on a comfy sofa watching Glastonbury for far too long, of course the sensible thing to do is to get up for parkrun. Naturally I’m a very sensible person so that’s what I did.

I did have trouble getting up, so I was a little late setting off, and a little late arriving. As I headed down the slope from the car park I could see runners already coming to the end of the first lap of the first loop. (Chippenham parkrun is two laps of two loops in Monkton Park down by the river). I dropped my water, headed over to the start area and started running whilst declaring to the marshalls ‘I’m late. I’ll still run all the laps!”
I confused at least one marshall (sorry!) and spent my entire parkrun catching and overtaking runners. A Harriers friend said on Strava it would be good practice for the next Lacock relay!

P.S. There has been a delay in processing the official parkrun times, so I don’t know yet how late I was starting.

P.P.S. Times now in, official parkrun time is 30:32, my Strava time is 26:25 so I was officially over 4 minutes late. Whoops. Annoyingly that would have been my second fastest parkrun time ever. Impressively I finished in position 126, the last finisher was position 177, meaning I overtook 51 runners. Definitely good practice for Lacock!

So after 4 days of running which included 2 races,  I thought it best not to run today. I know people who do long running streaks and run every day, even if it’s only for a mile. I must admit I don’t know if I could be bothered getting ready to run for just one mile, but my legs are feeling very tired today so I wouldn’t want to go any further.

With my sensible head on then, I didn’t run. For today’s Juneathon I present ironing squats. 10 squats whilst ironing shirts. I can’t say I recommend this either as a great form of exercise or as an efficient way of performing household chores. However it is done.

Later in the evening husband and I went out for a second consecutive Friday (unheard of!) We went down to Bristol harbourside to see Seasick Steve. He was fabulous, very entertaining and great music. After standing, jigging, and doing that strange ‘dancing on the spot without lifting your feet off the ground’ for several hours I felt I had a proper workout. More so than the ‘ironing squats’ of earlier! 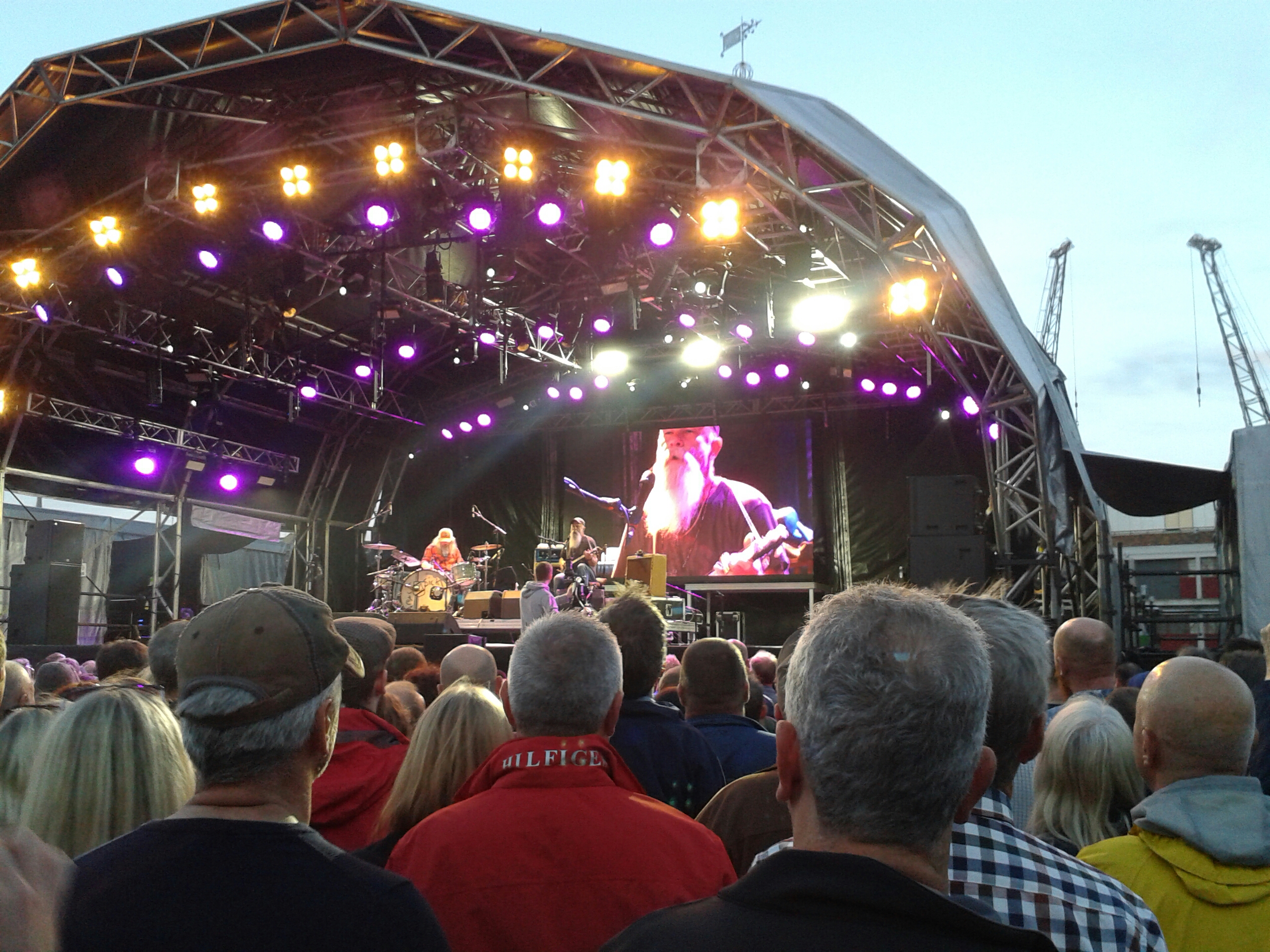 As a complete change from yesterday’s relay race, tonight I ran my slowest 5K ever. I wasn’t racing, but I was running the route of next week’s 5K River Run with runners from the Chippenham Harriers Beginners Group. This had been organised to give these new runners a recce of the route before their first race at the end of their course.

As I was a couple of minutes late I had to catch them up, so remained at the back as a tail runner. The running was complicated at the start because we were running on the same paths as racers in a 10K race. I was chatting away to a lady who was run – walking, trying to encourage her without being patronising. She did make me laugh though, when she said that sometimes marshalls’ encouragement just makes her want to swear. As we finished I told her I was marshalling next week, explained where I would be, and told her I expected to see her running and to hear her swear at me. I’ve never asked anyone to swear at me before.

5K in 46:52 that was quite fast enough on a hot night. As we said goodbye, she said thank you for running with her, and that I’d  been “entertaining”. Hmm!

Team sports have never been my thing. My deeply hidden competitive side would always do battle with my inate ineptness and lack of hand eye co-ordination, and the result would be shame at letting my side down.* I was always one of the last to be picked for teams in PE, but my natural nerdiness meant this was to be expected.

A series of relay races around a local village is therefore something I would have avoided like the plague … until now. Tonight I took part in the second of this year’s Lacock Relays. As well as lots of Chippenham Harriers running I knew some other people who were going as well, so I knew I’d have people to chat to. Each team is made up of a fast, a medium and a slow runner and teams are allocated on the night. As you register you are asked for either your time at the last relay, or for a recent 10K or 5K time. When I said around 56 minutes for a 10K, I was put down as 22 minutes for the 2.6 mile course (which sounded pretty fast to me).

The teams were called out and I was delighted to be in a team with one of my friends. I had been worrying that I wouldn’t spot who I was meant to be taking over from or handing over to, but I was to be the last runner and just had to spot my friend Julia as she came in at high speed. We didn’t know the first member of our team, but that didn’t matter, we cheered her on anyway as all of the medium speed runners set off together. Around twenty minutes later runners started reappearing. As each runner came around the corner people started shouting out their team so the next runner could get ready. Handover was a simple hand clap -so I didn’t have to worry about dropping the baton, despite my husband’s ‘helpful’ earlier advice. Julia took over from our ‘medium’ speed runner, and I waited again for the third lap.

As the fast runners streamed in and handed over to the ‘slow’ runner in their team, I waited and waited and finally set off – the fourth from last. There was quite a gap between me and the runners ahead, so I ran as fast as I could to make sure I had someone to follow. As soon as I could see other runners I slowed down a little because I was already hot and tired.

Aware that it was less than a 5K I tried to keep my pace up, but it was really very warm and sunny and much too lovely to be pushing too hard. Despite this, I came around a corner and was surprised at how close I was to the runner in front of me. Apologetically I passed her, and pushed on. Then there was another runner ahead, and I caught them as well.

By the time we were turning back onto the High Street I was overtaking my 8th runner and I was quietly delighted. Passing runners isn’t something I’m used to doing! A hot sprint to the line and it was done. Team CC complete! My Garmin makes my time as 22:01 so the guys registering made a good assessment of my pace!

In line with such a low key event, the top 3 teams won a voucher for a drink and a packet of crisps each in the local pub. It was a great friendly event on a lovely evening (did I mention how hot and sunny it was?) I’m very glad I went, and with another two in the series I’ll be back!

I have been neglecting my long runs. My run streak has led me to focus on short (but speedier) runs so I was determined to get a longer run in today. It was hard to get out the door as the following video shows:-

A day spent nagging teenaged children -that must count as a Janathon activity, surely? No,  okay how about cleaning up the filthy and rusty barbecue with daughter’s help? No?  Boy you guys are tough. What about getting everything ready for a Father’s Day barbecue for my husband, cooking everything, and proving it is possible to have barbecue food that isn’t black?

Tsk tsk -okay then, how about the 10 squats I did before bedtime? Yes? Thank heavens for that!

So I was intending to go to parkrun. I really was. But a brilliant meal out with my best friends that ended quite late put paid to that. I want to bed thinking “I’ll see what time I wake up…” and promptly woke up at ten to nine.

To give me some credit, I did feel guilty about it, so a little later I decided to do a delayed parkrun. This was over my own route, it had no marshals, I could happily forget my bar code, it wasn’t in a park but it WAS 5K. It’s down and back a small lane that can be busy during the week but I reckoned would be safe on a Saturday. As I set off, true to parkrun form I briefly thought I should have had a warm up, then I carried on anyway. I also suddenly remembered that last Juneathon I ran this route at the start and end to see if I could improve my time.

It was really hot and muggy and I remembered using that excuse last Juneathon on this route as well. The route has an enormous dip that you run down and up twice, once in each direction (I always use this as an excuse on this route – even when I’m on my bike). Anyway I stopped my Garmin at 3.11 miles and dripped the remaining short distance home. I was so sticky I am sure I left a slug trail behind me. Attractive.

On checking the data, I was delighted to see the following times and dates:-

Go me! Looks like the “Killer Tuesday” sessions (as we affectionately call the club “Efforts” evening) are working.

On a slightly more relaxed note, here are some sleeping kittens. Anyone remember a song from the 70s by Terry Scott called “my brother” (pronounced bruver”). It has a classic lyric that is so apt for these bruvers: “I know he’s good when he’s asleep … But you don’t know what he’s dreaming about, do you?!” 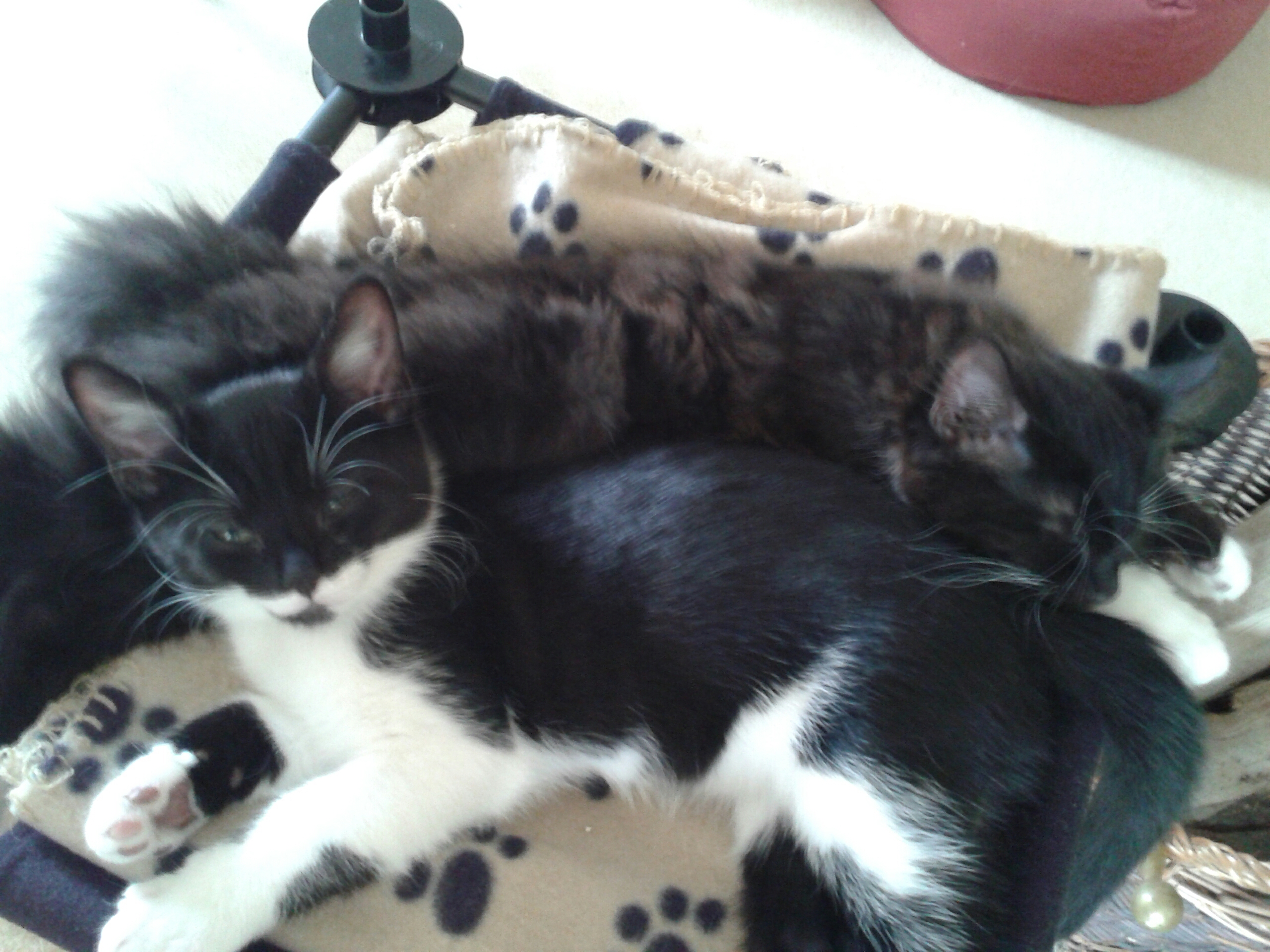