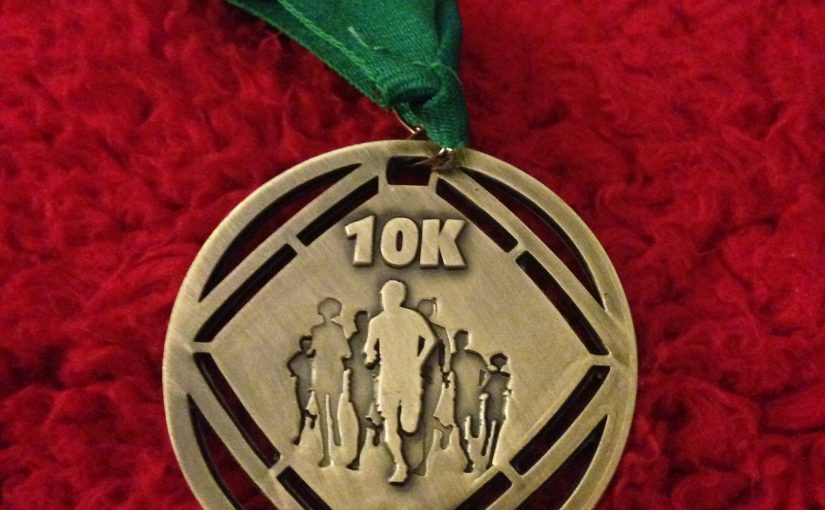 I love the Great Chalfield 10K. Beautiful course with enough undulations to be challenging but not so many that you can’t appreciate your surroundings. Low key organisation, but with accurate timing. Race HQ is the small scout hut on the Common in Broughton Gifford and profits from the race go to the Scouts. Always a medal, weather that varies from torrential rain through to scorching sun. Perfect!

Sometimes a race is run for a PB. Sometimes as a new challenge. Sometimes it feels like you’re taking several steps backward, and just hoping the forward steps will come in time. Last night was one of those, and bearing in mind my lack of recent running I was thinking of this 10K less as a race and more as a little trot with a number pinned to my front.

This year we had rain, and an altered start and finish (we did the ‘running around the common’ at the end rather than the start, but it worked fine and was less onerous than the usual “round a field to make up the distance”). Course was all on quiet roads apart from the tiny bit of field at the end (at least they’d cut the grass this year). Water station marshals promised us cider next year, there was no sign of Poldark at Great Chalfield Manor (it’s used as Killewarren, home of the Penvenens in the BBC drama), but I did spot a deer watching us runners climbing the last incline with a very puzzled expression on its face (“Why??!”)

I had promised myself a little walk up this hill, but actually because I’d been sensible and taken it easy from the start I felt okay and carried on running. I had an interesting chat with a man who’d dragged his son along for his first run. The son was swearing away at his Dad, but made it to the end just behind me. Kudos to him!

I was delighted to see (and hear) my fellow Chippenham Harriers who had waited for me urging me over the finish line (probably so they could go home out of the rain!)

I was also delighted with my medal. Apparently you’re supposed to get fed up of “participation” medals after so many years of running, but this one felt like a real achievement and that I’d really earned it.

Tonight I thought I’d try orienteering, seeing as there was an event starting at my children’s school. I obviously knew the area, so what could possibly go wrong?

On a very hot evening the day after a 5K race I went to Chippenham, I got a map and a dibber, and a very nice man explained how it all works. I had to get myself from control point to control point, finding my own way, and blip* my dibber at each control. Easy peasy, right? Erm, no.  I got lost, I got hot, I got thirsty, and I managed to make the 4K route into 5.5 miles. I obviously took the scenic route.

It WAS fun, but I hadn’t appreciated that orienteering maps are a little different to OS maps. On studying the map safely back at home, I realise that a couple of the footpaths I was trying to follow were actually contour lines. Sigh!

* blipping isn’t an official technical term, but dibber is.

After many weeks of coughing and sniffling, and feeling very sorry for myself (and my poor family who had to put up with me) I’m officially back in the room.

It came as a bit of a shock to discover I had entered a 5K race for last night. Heddington 5K is run as a series of 3 races over the summer months and sells out in a matter of hours each time. This might be because the course is overall downhill, and thus practically every runner I know has run their 5K PB at this race.

I wandered over last night, and was met by the vast hordes of Chippenham Harriers who also knew about this race’s magical ability to practically guarantee a PB. With lots of chat, and catching up with running buddies I hadn’t seen for weeks, I didn’t have time to feel my usual pre-race nerves because it didn’t feel like a race.

As we moved to the start line I conciously kept to the back. The race starts with a mad downhill dash which means after half a kilometre you are already regretting your pace. My simple aim last night was not for a PB, but to have a steady run, with no walking / coughing / photo stops. Ideally I was hoping to try and stick to 10 minute miles but I was flexible on pace (I.e. I had no idea what to aim for!). I found myself next to another Harrier (called Nikki) who was doing exactly the same, we fell into step at the start, and ran together the whole way right up to the point where she managed a sprint finish and I managed a finish.

I was very pleased with my 31:04 time, which looks pretty much like spot on 10 minute miles to me, and with the fact I didn’t have to walk! Well done Calne Running Club for such a brilliant race, and especially for the chocolate at the end!

So looks like I’m back in the game again (well, I will be once my face loses this magnificent shade of puce!)