The fourth in this series,  the third I’ve run, and the second on the new course from Bath Racecourse. Also the first time I’ve run in shorts*, in February. Most of this race was the same as the January running, so just read my report of it so I don’t have to write it again.

Differences this time? I really wasn’t feeling it before the race. I even Tweeted about it, but moaning didn’t help (it never does). The waves seemed much smaller today – maybe only 50 people lined up with me for the start of wave 4 – so there was never any waiting or queuing at stiles or puddles. Once we set off, I cheered up somewhere between being told I was wearing the best socks, and getting said socks covered in mud.

The puddles were just as deep as last month, but the overall slippiness was less which made it more enjoyable -it was possible to stagger up the hills rather than crawl up. Chatting to a man in the car park afterwards, he said in the section that climbs back up through the trees it looked just like groups of zombies staggering along. I reached the top of this section, came back out onto the footpath and told the marshall “I’m a broken woman!” so I know how they were feeling.

Also on this hill, a very practical Northern lady passed me saying “I hope them socks’ll come up alright!”**

So another muddy hilly race done, and the final part of the interlocking medals collected. 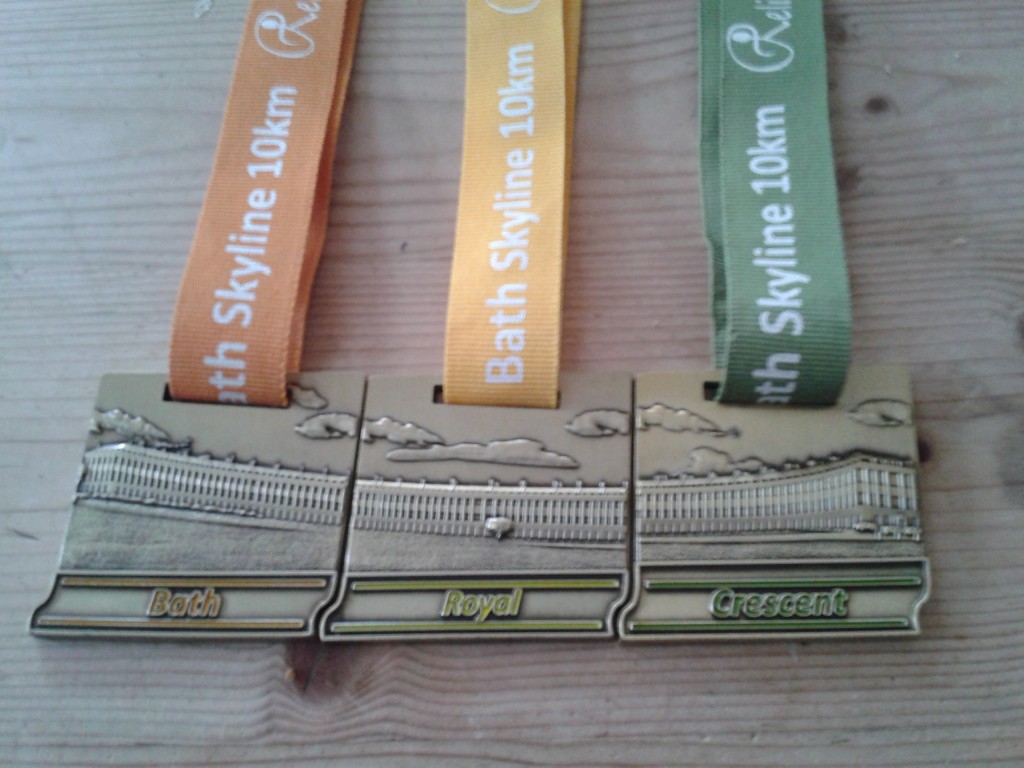 I wasn’t sure if I’d run a series of races like this again, they have messed up my longer runs. Then I saw Relish Running have another series that goes through old railway tunnels in (under?) Bath that has a train on the interlocking medals …. I like trains!

* Showed my son the “shorts and long socks” look, and he sighed and said “at least you’re not wearing sandals as well”

As I posted yesterday, I suddenly realised on Saturday morning that I still needed to fit two runs in this week in order to complete my 3 runs a week for jantastic. Truth be told I was still in a post-Janathon, post-lurgy slump and have been enjoying not running much this week, so this was an unpleasant realisation.

My 3 mile plod on Saturday was fine for one of those runs, but I’d also said I’d complete a long run of 6 miles this week, so that was what I needed to do yeaterday. Unfortunately I also needed to get the paint brush and huge pot of emulsion out and do a bit more painting upstairs and on our newly replastered dining room ceiling. 4 hours of painting and I was shattered. And I still had to do this 6 mile run.

If this was Janathon, I could quite happily have recorded painting as my day’s exercise. (In fact I did, on several days this year). But Jantastic? Oh no – painting’s not good enough for them. It has to be running. Sigh. Oh – and it’s February now – what’s with the Jantastic thing? Eh? Mm?!  You see – Janathon is better than Jantastic – I rest my case.

So at 4 o’clock I put the paint roller down, put on my trainers and set off. The sun was just about setting, it was starting to get cold again, but I did discover that going up a hill, with the sun setting behind you, means you can take photos like this:

Actually – whispers – if it was Janathon I wouldn’t have got out for a 6 mile run, so maybe there is something to this Jantastic thing after all …

Of all the feeble excuses not to run, “I’ll have to wash my running kit in the shower” Is up there with “but the plasterer’s here and I’ll have to make lots of cups of tea”.

Yes it’s been that kind of week. Our dining room ceiling has been replastered, and the washing machine gave up the ghost and can’t be fixed until next week. This has meant lots of hand washing and visiting my parents with a big bag of dirty laundry. (Thanks Mum and Dad!)

On Saturday morning I suddenly remembered about Jantastic and realised I need to fit two runs into two days so as not to fail. So off I trotted around the village, determined to stay as clean as possible to make it easier to wash my kit in the shower afterwards.

All went well, until I took a short footpath that I haven’t been down for months. There was no frost today, so of course it was very soft and muddy, and despite being absolutely flat I managed to slip over. Just a few strides from the stile to take me back onto the road, my foot slid from under me and down on my knee I went. Fortunately the verge was so soft I didn’t hurt myself. Unfortunately I ended up with a very muddy pair of running tights to wash in the shower. But most importantly, no one saw me fall over (and that’s what matters!)

So I finally made it to the end of Janathon. Thank heavens for that! My cold is also still lingering -not so thankful for that. Full of snot and all out of ideas and enthusiasm, I asked my son to suggest what I should do for my last Janathon exercise. He simply answered “star jumps”. Sadist.

So 10 star jumps done. Janathon 2015 done. I think I might spend February under my duvet.