“You get a medal just for running FIVE miles?” spluttered my husband, as he staggered in after cycling 103 miles (minus a medal). However he had had beans on toast, tea and cake provided at his event so I don’t know why he was moaning, really. The five miles in question, were the “Fearless 5” race which was part of the “Flying Monk” race, held at Charlton Park near Malmesbury, Wiltshire. It was an off road course, around fields, tracks, woods and parts of the estate. It was beautiful, the sun was shining, runners and marshalls were smiling, and yet despite the weather we’d still been promised some mud. The muddy sections had been conveniently named and signposted so we’d know when we were approaching them. These had names like “Boggy Bottom”, “Abbot’s Aisle”, “Monastery Mile”, “Friar’s Frolic” and ”Monk’s Mayhem”. Setting off one chap charged forward like a canonball being fired, pulling faces for his family, whilst the rest of us slotted in behind and tried to find a good pace whilst running in single file around the edge of a field. Mile one was spent just marvelling at this fantastic sport, where you can spend Sunday morning in the company of like-minded souls, feeling your body working as it should, in the sunshine, in the countryside.

Track followed field, and woods followed field. As we came up to the first swamp (“Boggy Bottom” I believe) I could see canonball man flailing around, swearing loudly, having left a trainer behind in the mud. I tip-toped through the mud and left him to it – the sheer volume of his swearing told me he was fine. This unsporting moment was unfortunately captured by the race photographer:-

By mile two I was feeling very glad that I’d entered the “Fearless 5” (which was one lap of the course) rather than the full “Flying Monk 10” (two laps). By mile three I was wondering where the water station was – this race was warm! By mile four I was thinking if they’d had a quarter-length distance (the ‘Nervous Nun’?) I should have entered that.  Just as I was thinking of giving running up as it was all too hard, we came round a field and I could hear the P.A. system at the finish line. I overtook one last runner, and was then in turn overtaken by someone else in the usual finish line sprint tit-for-tat. Finished! Medal, cup of water and orange in sweaty hand and suddenly I loved running again. My trainers bore witness to the boggy bits I’d encountered, and scratches on my leg and arm proved I’d found some brambles as well.

I was mightily pleased with my Garmin time of 48:08, and amazed when the official results were out. I was 6th Woman home, and 3rd in my Age Category! I had another chance to wear the beautiful badge my daughter made for me after my Parkrun debut.

I loved this race, and there was just one thing that bothered me about it. Why was it so poorly attended? Only 51 runners in the Fearless 5, and about the same in the Flying Monk 10. I’m guessing so many runners are nearing the end of their marathon training about now and they simply daren’t go to an off road race for fear of getting injured. However, although muddy in places, this course was pretty gentle. No killer hills, just a few inclines (although I do confess I walked up one slope through a wooded section because it was muddy, slippy and I was knackered). The shorter distance was in no way treated as a lesser race than the full 10 miles, and the great organisation and friendly marshalls would make it a perfect introduction to running and racing off-tarmac. There. Rant over. Might just go and polish my medal again.

How can one run contain two such differing emotions – success, and embarrassment? Surely one would preclude the other?

Well the success is easy. When you’re running and a man walking the other way tells you the path ahead is closed but you keep on going, it’s a success. When you reach this sign on the path :- 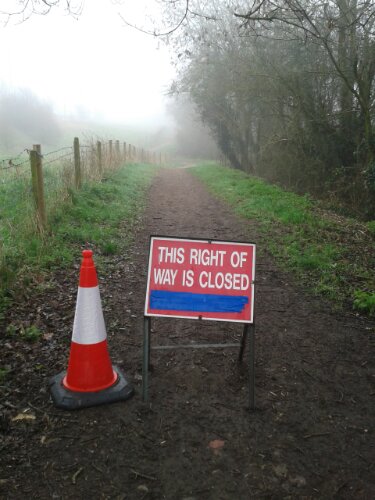 and you decide to carry on to see where the problem is, it’s a success. Despite this, it can still look like your run is going to be a failure when you reach the bridge that is being rebuilt and orange safety netting is completely closing the footpath. However if you then ask the man fixing the bridge how you can get around and he pulls the safety netting to one side and says you can come through as long as you’re careful, then that’s a success!

Now for the embarrassment. It was very foggy today, and most people seemed to have decided to stay indoors. Running along the canal that’s in the process of being renovated and which is normally busy with dog walkers, tourists and cyclists, I was surprised to find it was practically empty.

On my way back up to town as I came to the one bridge on thepath, I ran under the bridge and couldn’t resist making loud “woo woo” noises to hear the echos. They were great echos, but as I came out from the bridge I came face to face with a man and his two dogs. Any hopes that maybe he hadn’t heard me were shattered when he sniggered and said
“Bet you didn’t think there was anyone here!”

I will leave you to imagine how red my face was as I slunk off. At least I gave him something to smile about.

After feeling gloomy in my last post, I’m very happy to report that I’m feeling Good again! A brief flash of sunshine has helped, along with running again, eating better and getting slightly more sleep. The sleep thing is in the process of being sorted, as it’s currently being sabotaged by this fellow:-

Yes, he looks very cute when he’s asleep, but unfortunately he’s been waking up earlier and earlier and being a Mummy’s boy comes straight to tell me all about it. Loudly. Yesterday it was at 6.20 am when my alarm is actually set for 7.00am. If yowling loudly doesn’t get me up, he jumps up onto my bedside table and knocks the cat-drinking-prevention-device from the top of my water (I put a coaster on top of my glass to stop him drinking from it). If that doesn’t work, his latest trick is to carefully pat at each object on my bedside table until it falls onto the floor. Cue me grumpily and myopically searching around for my glasses yesterday morning and eventually finding them under the bed.

Anyway, despite this feline-induced sleep deprivation, I still feel good. I ran 3 times last week with a long run that was meant to be 8 miles but ending up being 9.5 miles. I got out on my bike at the weekend, with both children (this is a major achievement!) To top it all, I set out to run 4 miles yesterday, along an out-and-back route I run at least once a week, determined to push it just a little, to run “comfortably hard”. When I got back and uploaded my data onto Strava I was delighted to spot that I’d run it the segment heading back home in my 2nd fastest time ever. I was even more pleased to see that the only time I’d run it faster was in a race, last year.

I realised the other day, that since the New Year I’ve not been feeling myself.

“Who have you been feeling then, eh?” << Thought I’d get the gag in before anyone else did.

I’ve been feeling like an inferior, older, tireder and sadder version of myself. And that’s not been good. Was it the not running? I certainly felt like a different person when I wasn’t a ‘runner’ for four weeks. Maybe it was the lack of daylight and fresh air because I wasn’t running. With the atroctious weather we’ve had, some days I didn’t set foot outside the house. Maybe it was my recent birthday? I’ve never been too bothered about getting older, but this birthday did feel like standing on the platform at the top of a big playground slide, wobbling slightly before sliding down to the next ‘big birthday’. Maybe it was a hormonal thing. Perhaps it was the couple of weeks of bad sleep I seem to have had. Possibly it was because I have no new goals on the horizon, nothing big and scary to motivate me. By contrast, my husband has some big sporting challenges this year and is sickeningly enthused (and scared, truth be told). Actually I haven’t got a single race  to prepare for as I have just been feeling too old and slow. Possibly, just maybe, it’s been a combination of all of these factors. Going down with a cold last weekend seemed like the final straw.

Last week, I was fed up of feeling fed up. I felt bored, boring, tired, unfit and ready to give myself a good talking to (and a kick up the backside). After running too much too quickly a few weeks ago (which didn’t improve my mood) I decided to be sensible this time. I set off and ran just 3 times in the week, with plenty of rest in between and all at a slow easy pace. I bought some long overdue new trainers (which are scarily white, shiny and pink, Ugh!) I tried to get to bed at a better time, and resolved to make sure I was eating better with less sugary rubbish.

This week, after shaking off the cold, I feel better. I’ve run on two cold but clear mornings. I’ve had some better sleep. I’ve eaten more fruit and veg, tried to cut out the chocolate, and thought about how much protein I need. I’ve even spent several hours digging on my neglected allotment. It feels like a weight is being lifted from me, and I’m liking it.