Tapering is a time to rest and recover from your hard training. The last few weeks before a race are the time to cut back your long runs, get your strength back, refuel and rehydrate. They are not the time to pick up a niggling twinge. An injury at this time is also not an excuse to do zero exercise and yet still eat all of the food.

Of course, this is basically what I did. However I didn’t panic. I stopped running, I iced, stretched, rubbed in Ibuprofen gel and wore my compression socks. Two weeks on and I tiptoed out for an experimental run this morning, and … it felt fine. Phew!

Three days to go … now to write some lists for marathon day!

Now to get ready for this marathon.

You know that feeling.

You ran a fast 10 miles and then spent the rest of last week nursing sore shins, but you finally persuade yourself out for a nervous 4 miles in the rain and your shins feel fine.

That feeling. It’s a good one.

All together now … ” RUNNING!”

They should not be taken on holiday and worn for the following activities:-

Walking in the Lake District

And certainly not pushing open lock gates on the canal. (No photos of that one -sorry).

I think it was the last one that particularly broke the arch support in my running shoes (although along with opening and closing the lock gate paddles it was a great upper body workout). All I know is my plans of running up and down the tow path never materialised, and my first couple of runs back home left me with knee and shin twinges. Getting injured just seems so stupid and such a waste of time, so I immediately ordered myself a new pair of trainers and didn’t run until they arrived.

The good news is that two runs in my new shoes and I’ve had no more twinges or aches. Also the oh-so-pink shoes that I’ve always hated have now been replaced by a very stylish black and purple great-for-winter pair.

The bad news is that I missed getting one last long run in before Chippenham Half Marathon on Sunday 7th September. I struggle with long runs in the Summer holidays but this year I played it safe and I decided not to run. Yes I could have run and made it round I’m sure, but my shins were saying “at what cost to us, eh?!”

I know how to cheer myself up – I’ll enter another race!

Last week’s thought process any something like this:-
Hooray my niggle seems to have finally cleared up.
Fab I’m enjoying my running again.
Yay I’ve found a plan in a magazine to crack 2 hours in a half marathon.
Whoop I’ve run three times in three days.

Damn, my shin is sore.

On a lighter note, Tuesday’s run was in awful weather, incredibly windy with rain lashing down. A mile in, with hail battering my face I actually stopped in the middle of a field and considered turning around and going straight back home. It was only the thought that the second half would be more sheltered than the first that kept me going.

I was right -it was more sheltered, and as I stopped to grab my breath I took a quick selfie to see how wet I was. Not my most attractive photo ever, I think you’ll have to agree. 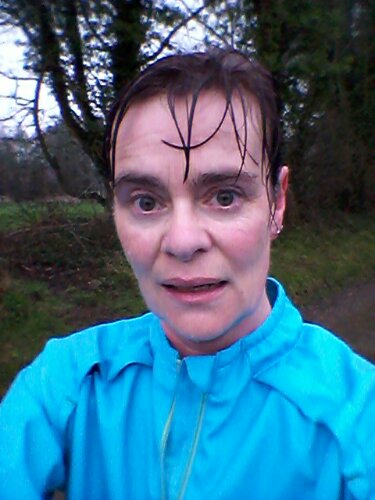 Update -I made it home safely and discovered the rain was so heavy it had even made it through my best ever running jacket. Boo!

So the reason I didn’t run today had nothing to do with the weather. Oh no, no fair weather runner, me.

Well, okay, I will confess that my heart did droop a little when I saw the rain this morning. But it drooped lower when I realised my calves felt tight.  I will NOT have shin splints again -I refuse!  So I decided best not to risk anything, so not to run today but to do … something else.

Cue another DVD with an Abs workout. Cue another American lady with a strange voice. Cue me lying on the carpet with cats looking on, worried as to whether I’ll be able to get back up and feed them later. 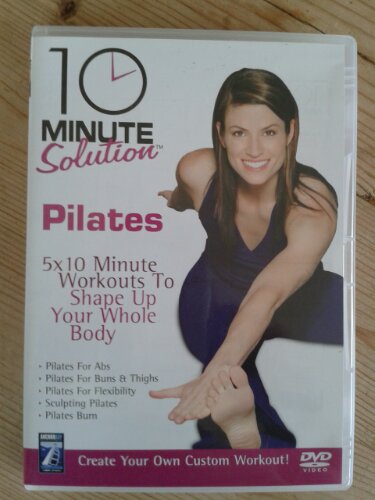 I still haven’t worked out if she’s referring to my “littl’ belly” or my “low’r belly”.

Just realised, haven’t blogged all week. Not that I couldn’t think what to say – most of my runs are spent mentally composing blog posts. Unfortunately most of these literary gems seem to dissolve in the hot water of my post run shower. It’s not that I haven’t been running this week – no, 3 out of my 3 runs done so far.

Is it that I haven’t had any photos to post? Possibly – I’ve been determined to post NO MORE photos of muddy lanes, large puddles or splashed legs. However that seems to have been mostly what I’ve seen on my runs this week, so no photos.

Is it that my runs haven’t gone well this week? Well my easy 3 miler was replaced with a 3 mile ‘blast’ because I was getting sick of sloooow plodding runs. Very good it felt too! My 7 mile medium length run went so well it felt like a short run. 4 miles in the cold yesterday and my heart rate barely wobbled above 70%.

So is there another reason I’m not telling you? Hmm – you’ve got me there. Its that awful, boring cliché known as shin splints. I have been congratulating myself this week on getting further in my training than I managed last year. However I have been doing so whilst trying to ignore that annoying twinge in my lower leg. Maybe that 3 mile blast wasn’t such a good idea I thought, as I came home and reached for the ice pack. Mind you, Tuesday’s 7 miles went okay, but then I did prepare thoroughly. There was the Googling for appropriate stretches, then rolling a golf ball under my foot (ow), followed by foam rollering my calves (OW!) Just as the cats were becoming quite amused by all this palaver, I went and spoilt it by smothering my lower limbs in Deep Heat. The sight of two disgusted feline noses turned up at the smell was a sight to behold, and I made a mental note not to stop and chat with anyone en route whilst smelling so medicinal.  These preparations seemed to do the trick, and the run went well.

Didn’t bother with such extensive preparations on Wednesday, and I had to stop and have a little stretch at the half way point. I was ignoring the ignominy of stretching after only 2 miles by telling myself anyone passing wouldn’t know I hadn’t gone very far. Then I spoilt my calm demeanour by slipping off the kerb I was balancing on the edge of. Sigh.

Lots of rollering and icing later (sadly not of the baking variety) and I’m getting ready to plan my long run for tomorrow. Deep Heat is on standby (sorry cats), compression calf guards are ready and waiting, positive thoughts are lined up. Just need to check the weather forecast (Arctic winds, anyone?!) and plan a route. Wish me luck!