I set new PBs at 5K and half marathon distance, and completed my first marathon. I missed out on a chance to set a new 10K PB on the pancake flat course that my current PB was set on, but I did set a better time for a ‘road’ 10K.

So, moving onto 2013, time to think about new goals. I have another marathon to work towards, and my main goals are to complete the training without injury, and to complete the race in a time that starts with a 5, rather than 6.

Anything else will be a bonus!

So Happy New Year to you all, may we all have a year of great running and new PBs.

Fed up of seeing photos of soggy Wiltshire fields ? Me too – so how about these photos of a different view on my run this week? Perfect for shaking off the Christmas cobwebs, and hopefully burning off some chocolate on the way round.

Its good to run in different places, and I’m very proud that I got myself out the door running whilst away from home. Anyone else manage this over Christmas?

He knows me so well 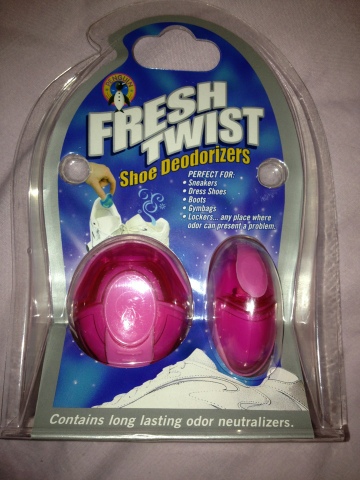 Its so important to have a schedule for marathon training, and to stick to it.

So having found a good schedule, I promptly started at week 2 (to make the dates work).

Then I swapped weeks 3 & 4 around to try and make it easier to fit some running in next week (Christmas!).

Then I swapped my days around this week because the children finish school Friday lunchtime and I didn’t want to try and fit my long run in before rushing to collect them.

So sitting here on Monday morning, I’ve just got back from my Friday 9 mile run.

As I say, its SO important to stick to your schedule.

So suddenly the temperature has plummeted, and I’m faced with the dilemma of “what to wear when I go running”. Not enough clothes and I’m miserably cold all the way round, too many and I’m red faced and sweating after a mile. I normally manage to gauge it about right, with pockets in my gilet for discarded hat and gloves, and many convenient hedges for stashing jackets and top layers in for collection later in the day.Once the temperature falls low enough to need some kind of hat however, then I’m really stumped. Never having been a dedicated follower of fashion, I thought I had long since stopped worrying about how I looked when running. Then the head gear appeared.

My first option is a hat from a hat and gloves set by Nike. Its light (so great for stuffing in a pocket when you no longer need it), does keep your head and ears warm to a certain degree. However, it does make me look like I have an egghead, and not in a good way.

Second option is the attractive 80’s style fleece headband. Main problem with this, is knowing quite how to wear it.

Wearing it under hair without bobble is a no-no for someone with a low hairline like me.

Wearing it under a ponytail (as pictured) makes my pony tail look more like a rats tail.

Wearing it over the top of my hair, 80’s tennis player style, looks okay at first (think swish skier look). However after 5 minutes it gives me a curious ‘mushroom hair’ look.

So, all of the above look ridiculous. However, the secret between you and me is, they are all actually really quite toasty around the ol’ lug ‘oles. And that’s all that really matters.

So if you see a  mushroom headed / rat tailed / egg headed runner around North Wiltshire, with a secret inner head ‘glow’ (think Angel Gabriel style halo crossed with some one who’s eaten their Ready Brek)- that’ll be me. Just need to sort out some warmer gloves now – the matching Nike gloves were useless today …

So my 3rd 3 mile run in 3 days -a  strong start to my marathon training!

However this was by far the coldest run of this week, with a thick frost and frozen hard ground.

Beautiful, but hands were frozen all the way round (even with Nike running gloves on). Rest of me was okay, but then I was wearing a hat, long running tights, TWO long sleeved tops and and hi-viz running gilet. 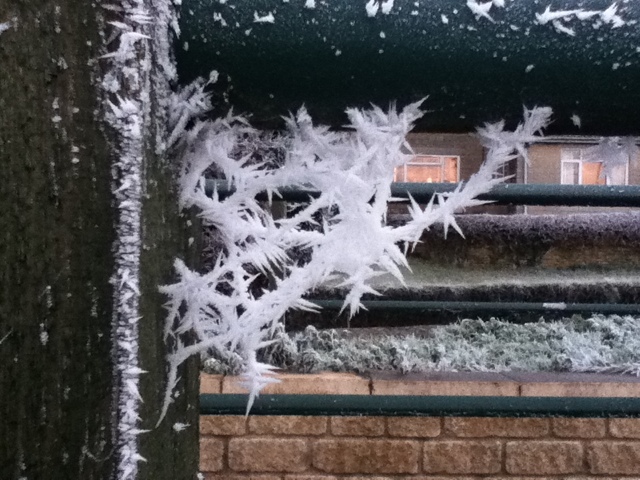 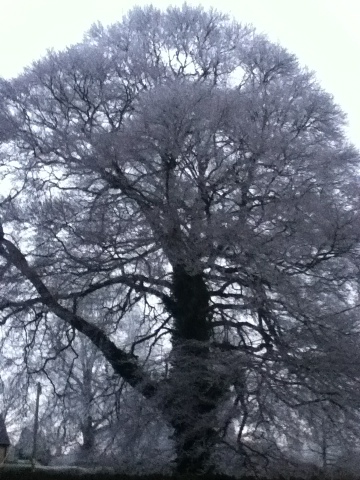 In true Black and Tabby style, I started my training this morning for the 2013 Brighton Marathon by jumping in at week 2 of a training plan.After this year’s 16 week plan, I thought an 18 week plan was the best way to build the miles up more slowly than last time. Then I realised it was exactly 18 weeks until the race. Seeing as I hope we’ll manage a week’s holiday at Easter time,  this meant I was a week short and had to lose a week somewhere from the schedule. I decided it was better to lose it from the start of the schedule than the end, hence the diving in at Week 2.

This morning was just 3 miles. It was a very cold and frosty morning, but the sunrise was spectacular. 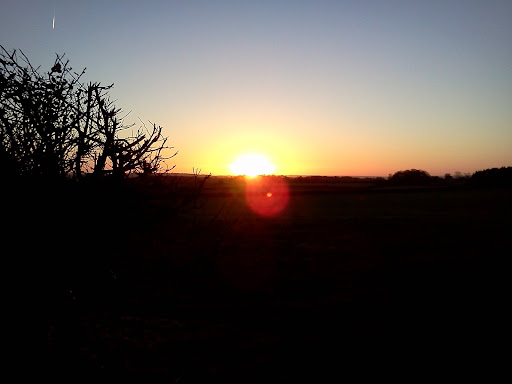 After supporting Dorothy House (our local hospice) when I ran in this year’s London Marathon, I was very keen to take part in their second ‘Santa Dash‘.

It was held on Sunday 2nd December, starting and finishing at Dorothy House. The route wound round some little lanes, down a main road, along the Kennet and Avon canal towpath, then back up the hill for refreshments.

First challenge was getting into the enormous costume – how to tie the trousers tight enough so they wouldn’t fall down vs. cutting off the blood supply to my legs. Boy do those beards itch as well!

Many photos were taken, a quick mass warm-up in the car park, then we were off!

It was a beautiful morning, the sun was shining, and we all soon warmed up inside our suits. Down the first few lanes there was a regular littering of Santa belts as they broke and fell off. Charging single file down the main road we had a few ‘toots’ from passing motorists, and then it was onto the towpath.

I so wish I’d had my camera with me here. The path was flat and the running was easy, apart from passing the odd bemused dog walker. The water was still, the trees arched over above us, and a thin red line of running Santas stretched away into the distance. 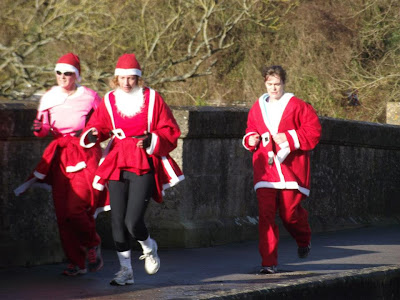 Crossing the aquaduct (twice) was exciting and meant we could shout encouragement (or abuse!) to runners just ahead of us, and then just behind us as we crossed the River Avon. I had to give in and take my hat off here, as my head had reached 1000C 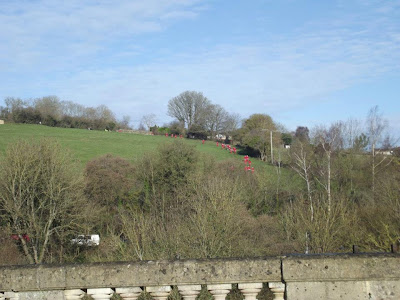 After that, was THE HILL. This was muddy and slippery, as well as steep. What was worse was that we could see it coming, and the straggling line of Santas struggling up it. 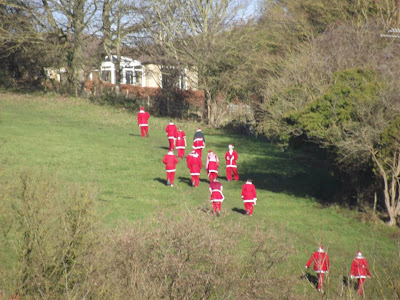 I confess – I walked up the hill. Everyone did. I have to confess as not only is it good for the soul but there is photographic evidence. That’s me, at the back of the group, hat in hand.

As the hill levelled out I started running again. Not far now! I even managed to put my hat back on just before crossing the finishing line.

It was lovely to be offered a cup of tea and a Danish pastry at the end, and even a bag of chocolate coins (which my children devoured).

So really well done Dorothy House for such a great event (and thank you for most of the photographs as well!) I hope you raised lots of money to carry on your amazing work.