In our house,  Saturday mornings are for having a well earned lie-in. Or even a not-earned-at-all lie-in. On Friday though, our builders had informed us that they would be arriving to pour concrete at 7.30am. On Saturday morning. sigh. Seeing as I was going to be up anyway, and seeing as a combination of builders and children had restricted my running this week, I decided it was time to dip my toe in the Parkrun water.

8:15am found me driving along the motorway to Swindon. My closest Parkruns are both around 30 minutes drive away (another reason I’ve not been before) and I wanted to be there in good time to park, find where the start was and, most importantly, find a toilet (a pre-race essential). It’s a few years since I’ve been to Lydiard Park and I wasn’t sure I could remember where everything was.

I found my way easily and parked closest to the cafe. I was reassured to see other runners getting out of their cars – at least I’d have people to follow! I asked a man, who was with his daughter, if he knew where we had to go (and if there were any toilets). He said he’d only run Swindon once before, a year ago, but they were on holiday so thought they’d come along. I’d met my first Parkrun tourists!

I locked up the car and followed them past the cafe (where he helpfully pointed out the toilets). I then walked on down the path and found people in Parkrun hi-viz jackets putting up a gazebo. I set off for a little warmup ‘jogette’ and explore. I soon found Lydiard House – and quite stunning it was too, with the sun behind the clouds and the leaves starting to turn orange. 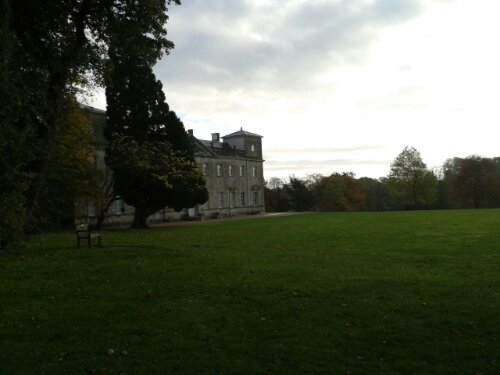 As I got back to the gazebo, a few more runners had gathered and more were appearing down the paths all the time. There were youngsters, parents with running buggies, runners of all ages, shapes and sizes. There were also lots of four-legged runners, excited looking dogs attached to their owners’ waists by ‘hands-free’ leads.  As I stood waiting, my carpark friend reappeared, pointed out where the start was, and described the route to me. He also helpfully pointed out the fact that the finish wasn’t at the start, but was just over the startline around a corner. Important info when timing your sprint finish! When I told him I was hoping for a time of 25 minutes he said he’d seen a 25 minute pacer and to look out for a tall chap in an orange hi-viz best with ’25’ on the back. 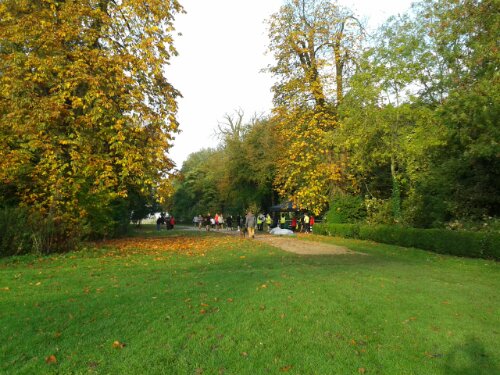 More runners gathered, and then we were being addressed by a lady with a megaphone who asked for ‘absolute silence’. As I commented to a man stood next to me, the dogs obviously hadn’t heard the bit about ‘silence’, as they were doing a great impression of the Hounds of the Baskervilles. I think they knew what was coming and were keen to be off. She said to be careful because the path was wet and to keep off the grass. She asked if there was anybody who was at their first Swindon Parkrun. I sheepishly put my hand up, received a round of applause, and a whisper in my ear from my neighbour that that meant I had to buy the teas at the end.

Next thing the hooter sounded, the dogs howled and we were off. I had been warned that the paths were narrow without much room for overtaking, and I learnt that was no exaggeration. For the first half mile I found myself jogging along at a very sedate pace. I could see a pacer in front of me with a large ’35’ on his back. I decided I had to move up through the pack of runners so employed a combination of skipping through gaps between runners and blatant overtaking by running on the grass at the side of the path until I could see the ’30’ pacer. He was running at about 8:30 minutes per mile pace so I carried on running at his speed.

The route heads away from Lydiard House, along paths around the surrounding fields. Two laps of a triangular course mean you can see runners both ahead and behind you for most of the way around. It is a pretty route, and every junction had a smiling marshal indicating the way. By the second lap I was feeling the run in my legs, so it was amusing and amazing to see how the dogs were trotting along quite easily, enjoying every step. I didn’t envy the dog owner who had to stop when their little dog wanted to investigate a small stream, nor the owner who was having to run whilst carrying a (full) dog poo bag.

As we came along the final straight I was glad I’d been told that the finish was not at the start (which we could see ahead of us), but was a sharp left turn and a short way ahead. I crossed the line, was handed my finishers token and walked round to the gazebo to be scanned. I chatted with other runners again as I rummaged in my pocket for my barcode. It is a simple system that obviously works well to record your time and position.

I drove home fairly happy with my time of 27:39. I hadn’t beaten my PB of 26:46 but after my slow start I hadn’t expected to. However I had made it to my first ever Parkrun and really enjoyed it.

I loved getting a text later on that day with my official time, and when I followed the link to the Parkrun results page I was amazed to see I’d finished 138th out of 288 runners, I was the 28th female finisher, and for my age category I’d finished third!

4 thoughts on “My First Ever Parkrun”