The morning of the Cricklade half marathon, 2014. A lack of pre-race nerves meant minimal pre-race “night before” preparation, which led to me dashing around the kitchen on Sunday morning, eating porridge with one hand whilst grabbing drinks and snacks with the other. The half full box of gels I’d been saving turned out to be mostly out of date, but the two I’d managed to salvage had completely disappeared overnight. As a last resort I grabbed the remains of a bag of Veggie Percy Pigs as I shot out of the house.

Cricklade is a very pretty little town that I hadn’t visited before, and although I parked about fifteen minutes walk away from the race HQ I simply followed the other runners to find it. (Runners are easy to spot on race day). At the start I was spotted by a good friend of mine who was doing the 10K. It was lovely to have a hug and a ‘good luck’ when I’d travelled there on my own. I lined up by the start, and by the time I’d contemplated how adrenaline stops you feeling cold when you’re dressed in shorts and t-shirt in 7 degrees centigrade, we were off.

For a small half marathon it wasn’t surprising that the roads weren’t closed. What was surprising was how busy it was. Runners, cyclists, horses as well cars made for an interesting route. The 10K runners set off after the half marathoners, so we had a stream of faster runners passing us. Although distracting, it did mean I got to see my friend again and have another quick word.

The course was an out-and-back route with a couple of loops but despite this it wasn’t dull. We got to see the leaders heading back whilst we were still plodding out, and we got to run between the lakes of the Cotswold Water Park as well as through pretty villages and under autumnal trees. The water stations were at interesting places, coming add they did at 1.5 miles, 5.5 miles, 7.5 miles, 10.5 miles and then 11.5 miles. I knew I would need water to wash my Percy Pigs down, so from the 5.5 mile stop onwards as soon as I saw a sign saying ‘Drinks Ahead’ I grabbed a couple of Percies from my pocket, stuffed them in my mouth and chewed frantically whilst taking a cup of water. The disadvantage to eating sweets was that I really needed the water as my mouth felt so sticky, but sugar obviously helped because I was feeling strong, and only felt tired coming up to mile 9, a distance that I always struggle at. A good talking to myself soon sorted that out.

As I was finally heading back to Cricklade I could see the church spire above the trees and houses and I could feel it calling me to the finish. The slight incline up the High Street felt like an enormous hill coming as it did in the last mile, but really it was the only slope on the course. I knew my time was good, but I was amazed when I stopped my Garmin and saw 2:09:31.

I had finally beaten my PB from last year’s Devizes Half and taken 3 minutes and 33 seconds off my time. 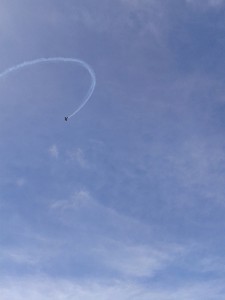 As I slowly walked around the field at the finish line to stretch my legs I confess I had a little tear in my eye. I blinked hard, looked up, and saw a small plane performing acrobatics over my head.

Thanks for the celebration, and a huge “Well done” to me AND to Percy Pig!

This plan kicks off with a ridiculously long run 9 days before the race,  followed by some gentle recovery runs and a speed session if the long run hasn’t already killed my legs. A couple of days rest and I’ll be good to go.  (‘Go where?’ is a question I haven’t asked myself yet,  as I’m worried the answer might be ‘to the knackers yard’). Friday was the start of this plan, as it was the day I’d got the boy and his cast into school uniform and back to school. Breakfast at 7.30 was a rushed affair as it was interrupted by the boy needing a clean dressing on his knee,  and wanting a packed lunch making,  and needing help doing up his shirt buttons and putting on his socks.  We finally got out of the house and I delivered him and his sister to school.  I then returned home and tried to get myself in the right frame of mind for a long run, when I haven’t done a long run for weeks.

I suddenly remembered the Beet Shot concentrated beetroot juice I had to try before the race next week, so I grabbed it and slugged it down.  It didn’t taste as bad as I thought it would,  but next time I might try it chilled as ‘cupboard warm’ was a little strange.

I was finally ready to step out of the front door when my tummy gurgled.  I looked at my watch and saw it was 11.30 – breakfast had long since gone down but if I stopped for a snack now I’d never get out.  Exasperated with myself for taking so long to get ready,  I dashed back into the kitchen to see what I could grab to eat.  5 Veggie Percy Pigs seemed like a good compromise between a quick energy boost and something I could eat on the go, so that’s what I grabbed.

I set off on a route that I hoped would be at least 10 miles and hopefully more like 11 in order to really get my body ready to run half marathon distance in 9 days time. The sky was dark and it was threatening to rain as I set off,  so it felt great not to have to fuss about suncream or sunglasses. Of course, a couple of miles down the road the sun came out. This is a strange talent I seem to have, not so useful when out running though!

The Percy Pigs seemed to do the trick, and most of my run was okay.  I felt tired,  bits of me were aching by the end,  but with a Gel after mile 6 and some unusual tunes on my ipod I ran 12 miles. Yay!

So just a couple more runs next week and I’ll be ready for a half marathon next Sunday.  I’ll let you know then how well Emergency Training Plan #2 prepares your body for a race …

Things I spotted on this new route

If a huge drum of Fibre Optic Cable isn’t exciting to you, then you obviously don’t live in a village with snail’s pace broadband but with the hint of Fibre Optic Broadband coming this month *does a little happy dance*.

Things I learnt from this run