So a race that took me several times longer to get dressed for than to actually run it. A race that I was more nervous about what I, and everybody else, would be wearing than usual. A race where the safety briefing ends with “and may the Force be with you. 3 2 1 GO!”

Yes it was May the Fourth, and it was the Sci-fi 5k. Fortunately the race didn’t start until 11.30am so I had plenty of time to get ready. A whole packet of hair pins, a can of hair spray and my carefully made costume later, I dragged my photographer (teenaged son) out with me and off we went. I suddenly realised as I was driving that I was getting some funny looks from drivers in other cars, but maybe they didn’t realise Princess Leia drove a large muddy Toyota.

We reached the car park, and I was expecting to see streams of runners in fancy dress heading to Race HQ. No, only families going to the park. Just as I was silently wondering if I’d come to the right place and at the right time, my normally unflappable son asked if we’d come on the right day. “Well, what’s the date?” I asked him. “May the Fourth!” he replied, smiling.

Race HQ was in a Wetherspoon’s pub and add I collected my number I was assured there were other people in costume. As we moved outside to the start area, in the park, we did finally see another couple of Leias, a rebel pilot, Obi Wan Kenobi (who seemed to have come in his dressing gown), and someone that I though was Captain Jack from Doctor Who & Torchwood, but who apparently was Han Solo.

As we set off, the weather had warmed up and It was beautifully sunny. I was already feeling warm in my long sleeved top and long skirt, but I kept thinking I couldn’t be as hot as the Dalek!

The course wound through some housing estates and then back through some parkland. It was all pretty flat and on another day, in a galaxy far, far away, in another outfit this would be a great PB race. I ran with a lady in a red Star Trek dress for a while and we consoled each other about running in a dress.

My blaster hand was sticky and slippy now and I was seriously considering ditching it. However my son had had his eye on it so I tried passing it from hand to hand just for a change.

Eventually we headed back into the park and could hear people applauding and see the finish line. I looked out for my son, the official photographer, but couldn’t see him anywhere. I received my medal and a bottle of water and found a shady area by a tree to wait for him. He sauntered over 5 minutes later having waited back at the car and underestimating how long it would take him to walk back. Sigh. Fortunately there were plenty of other people with cameras who then shared their photos on Facebook. Thanks John and Warren. 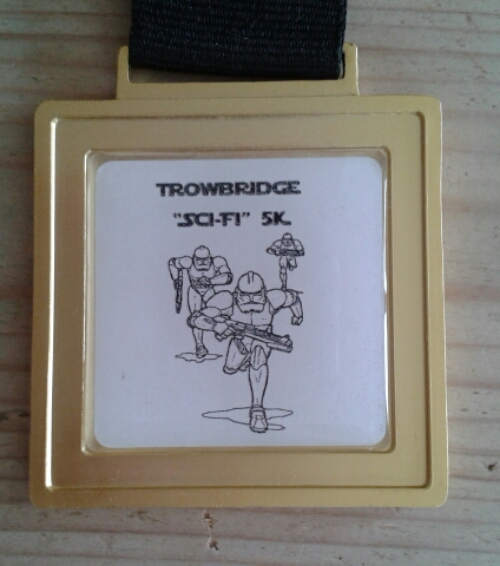 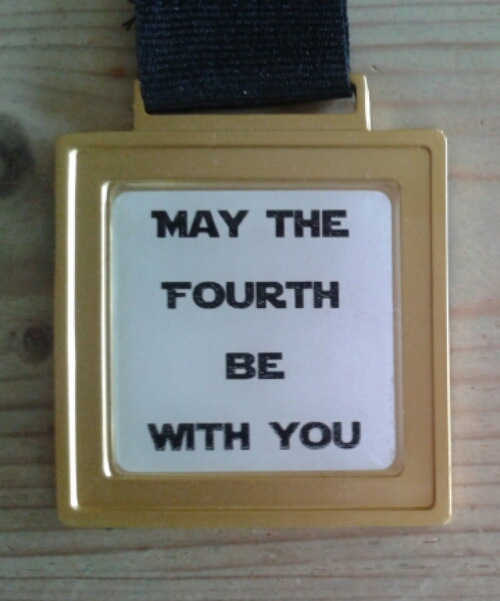 I almost forgot to mention the race super was Darth Vader. Well if he was behind me, I’d run too! 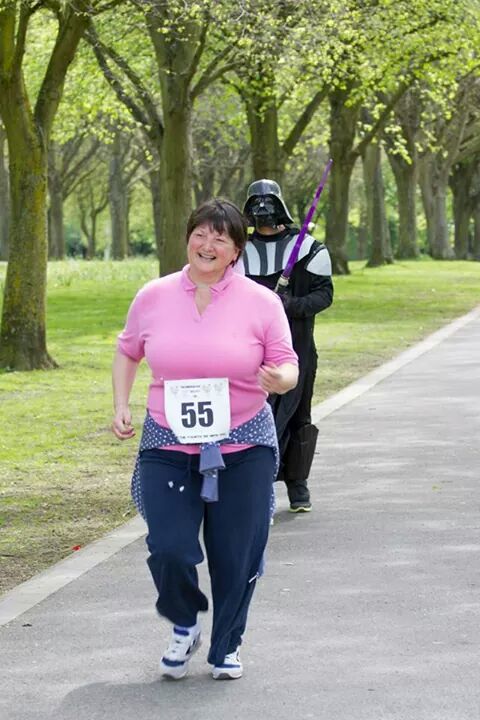 It was a good race, the organisers had obviously enjoyed branding it as a ‘Sci fi’ 5k, the weather was beautiful and the support was great. It was just a shame there were so few people in costume. My only regret (and I feel a little grumpy saying this) was that I didn’t win the award for the best fancy dress. I know it was for fun, and that as long as I was happy with my outfit that’s what matters. but I really would have liked to win!

Is that okay to say that??

… it’s worth doing properly. That’s what I thought when I entered the 5k race on May the 4th, in Trowbridge, called the ‘Sci-fi 5k’*. I talked about entering it here.

If I was going to do this race ‘properly’ then of course I had to do it in fancy dress. Being old school (or just old) I always think of films 4, 5 and 6 as the real Star Wars, so I decided to chose a character from these films. Hmm – a recognisable female from these films? Of course, Princess Leia.

It’ll be easy to make and run in a Princess Leia costume, I thought. I ignored the many people who suggested Princess Leia in her bikini, and also my children’s many helpful suggestions which included Jar Jar Binks.

Several weeks later (and only a week until the race) this arrived in the post :-

After several days of pondering about quite how I was make the costume, I finally dived in.

I then went shopping for ‘accessories’.

Of course, the most iconic feature of Princess Leia’s appearance is her hair. Her ‘space buns’ as I like to call them. Unfortunately I don’t have long, dark brown hair so the pile of stuff above includes brown wool and I also bought matching hair dye. Yes, I was the mad woman in Superdry matching the hair colours to a ball of wool.**

I just about have a costume now, and I need to have a dress rehersal. Mr B&T won’t be at the race on Sunday so has told me that I need to have a trial run (literally) so that he can see me running in my costume. I just can’t bring myself to step outside my front door wearing this outfit and run. I live in a small village. Word would get around.

Anyone else think I should have a trial run?

** I have since seen that Carrie Fisher is to appear in the new Star Wars film, so maybe I should skip the hair dye and just say I’m Princess Leia from film 7, when she’s old and grey?

In a fit of enthusiasm I’ve just entered the Trowbridge “Sci-Fi” 5K to be held next month.

Why is it the Sci-Fi 5K? Well, apart from the hopefully ace medal, it’s held on May the 4th, of course. I’m already loving this race – of all the questions I’ve been asked on previous race entry forms (age, address, medical details etc) I have never before been asked if I want to run for The Empire, or the Rebel Alliance. Tough decision, eh?

I’ve also noticed there’s a prize for the runner with the best fancy dress. I’m feeling inspired after watching the Great British Sewing Bee so am off to search for technical fabrics by the metre. I may be some time …