I was about to apologise for a self-indulgent blog posting, but then I figured that all blog posts by their very nature are basically saying “me me ME!”, so I won’t. However I will say if you’re not a fan of cats, nor of blog posts about cats, then look away now. This is a large post about a big cat. 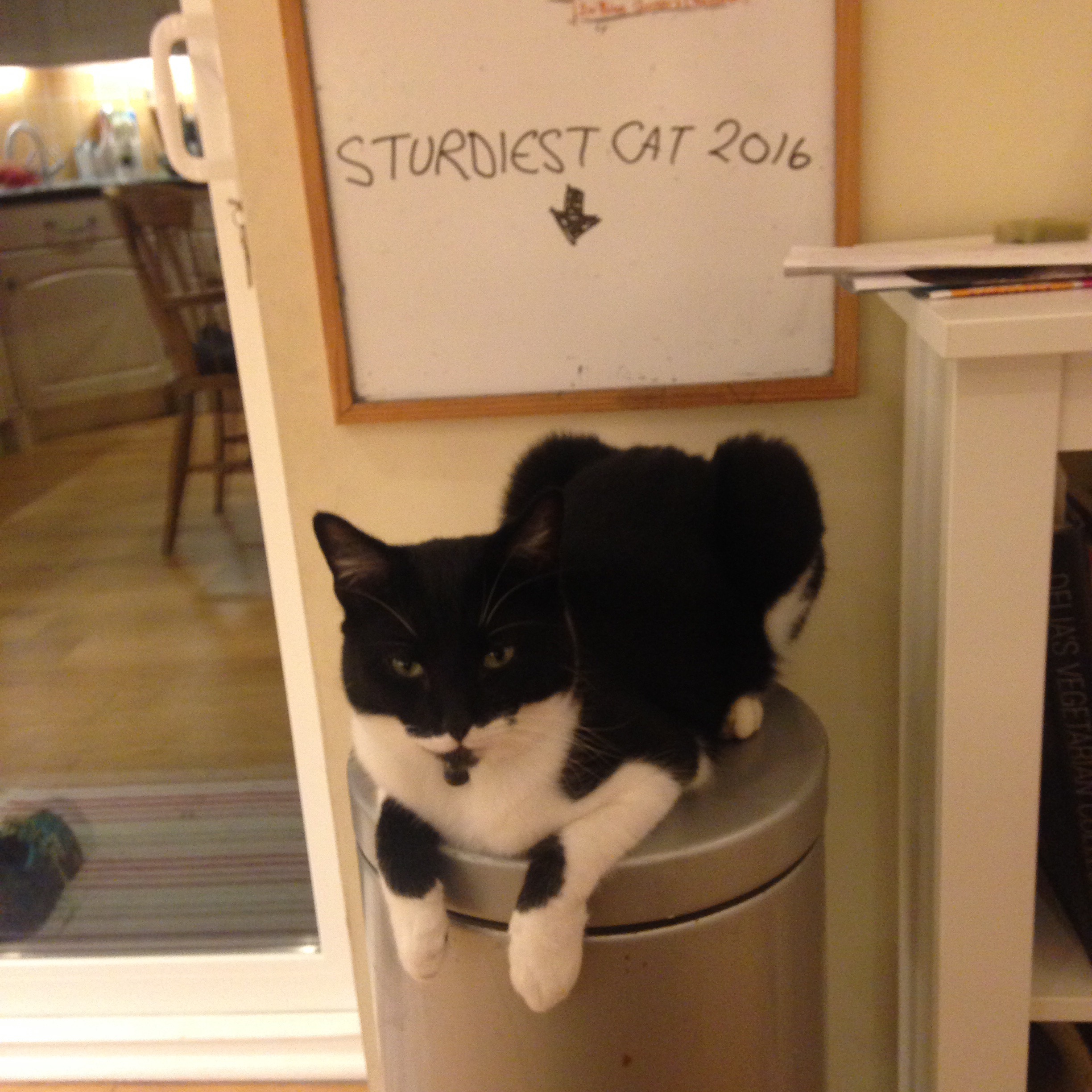 Neville was a sturdy cat. To say he was fat would be rude and untrue – he was large of frame, width, hat size, and also personality. He was large, dependable, chunky even, but definitely sturdy. On hearing of his death my brother-in-law referred to him as a “stout fellow” which was most definitely true.  Of all the cats I’ve lived with over the years, Neville was the friendliest. Whereas most cats would run away at the sound of the doorbell – someone was going to invade their territory! – Neville would run towards the door to see who was coming. We said he was our “meeter-greeter”, and as guests came in he would run ahead of them as if to say “you can put your coats here, the toilet’s on the left if you need it, straight on through to the kitchen!” You know the safety announcements they make on airplanes when they have to point out the emergency exits “here, here and here”? Well Neville would have excelled at that.

As with every part of him, Neville had a big meow and a big appetite. On the morning he died, as I was talking to his brother Luna in the garden, I could hear a foghorn-type cat cry coming from beyond the garden behind us. A cry of dismay, the cry of a cat stuck or trapped somewhere? I did not panic, I simply called his name and lo and behold with a loud and untidy scramble, Neville eventually appeared over the back fence. He wasn’t stuck, he wasn’t trapped, he was just shouting.   This was a regular occurrence, although in a “boy who cried wolf” moment I always had at the back of my mind the time when, as a very little kitten, he got completely stuck in our tall leylandii hedge and I had to rescue him whilst balancing on a ladder. Not his finest moment. He would often appear when I was out in the garden, and seemed to enjoy the company. Luna as well often mysteriously appears from the shadowy depths of the borders and hedges, just to check on what I’m doing in their garden. Neville’s finest hours in the garden came when the pond froze. It’s a fairly small pond, he was a big cat, but as the temperature dropped to 0C he would transform into Christopher Dean and slip and slide at speed. He obviously would have loved Luna to be his Jayne Torvill. However to be honest Luna’s extra-fluffy paws have zero friction on the wooden floors indoors so on ice he didn’t stand a chance. Neville would sniff and lick the ice, and chase frozen leaves around and around the icy surface whilst Luna watched on with mournful eyes. Neville was so disappointed each time the ice melted (or became so thin it couldn’t stand his weight).​​ 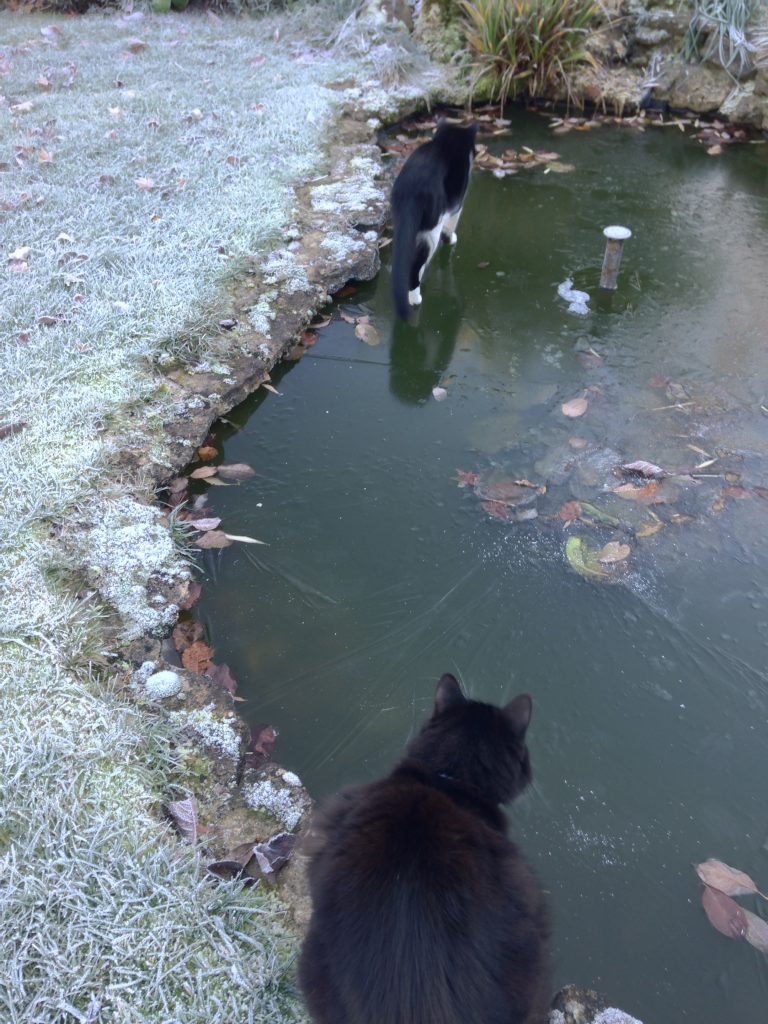 ​We would know when Neville was happy, because he would purr. Loudly. Like everything else he did, Neville put all of his effort into purring. Not for him the calm, effortless rumble of other cats. When Billy Tibbs sits on my knee and purrs, it’s a warm, quiet, calm vibration deep down in his tummy. When Neville purred, it was all in the throat with a loud raspy exhalation interspersed with a gulp of air back in ready for the next purr. 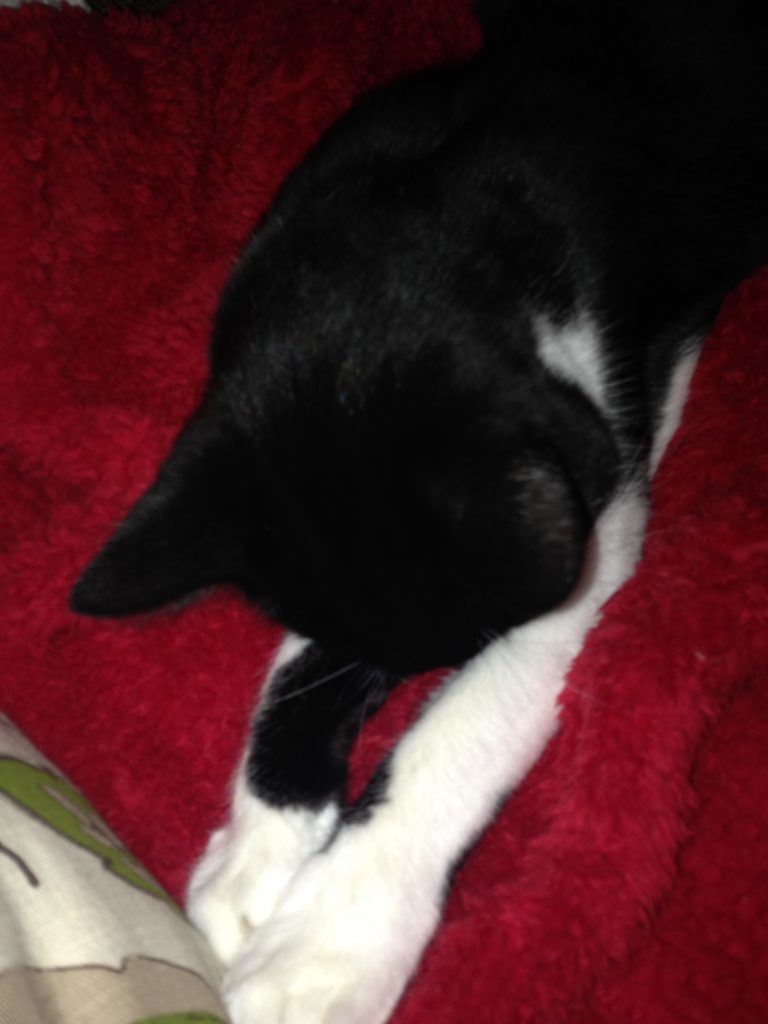 Neville loved his food. It was quantity rather than quality that interested him, and the sheer speed he could put away a bowl of food left Billy Tibbs astounded, horrified, and growlingly protective of his own (still full) bowl. Neville would eat anything. I’m struggling to think of anything he turned his nose up at. His love of food led him to the depths of his wickedness. 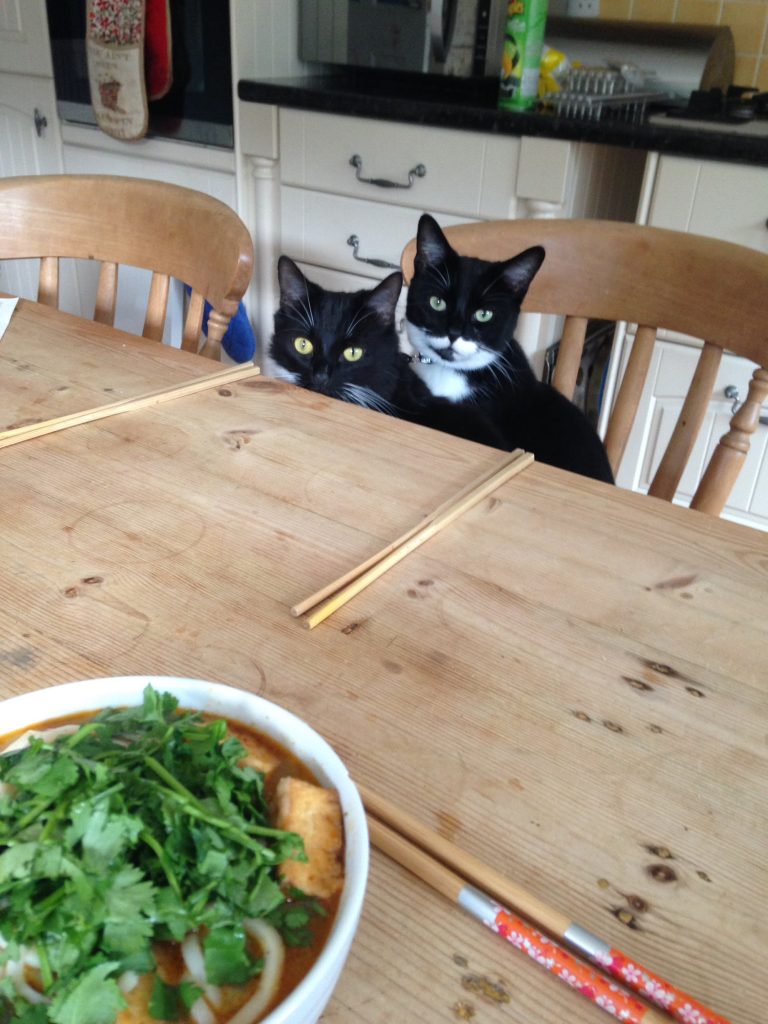 The time he unwrapped a jumbo hotdog roll and ate half of it. (It was after this we decided he was gluten intolerant, judging by the litter tray the next morning). The time my daughter threw a party, and after greeting all the guests (naturally), Neville was later found on the kitchen table tucking into a slice of pizza whilst a bemused guest watched him helplessly. The time my daughter left her advent calendar on the table overnight, and like a small(ish) furry tornado he tore through the cardboard and the foil to eat the chocolate underneath.  He was always sneaking up onto the kitchen worktops to see if he could find anything left out. We would often hear the tell-tale “clink” as his magnet stuck to the breadbin, and the muddy paw prints on the worktops drove me to distraction. Fortunately by now we have pretty robust immune systems, but there was way more than a peck of dirt left in the kitchen by that wicked lad. 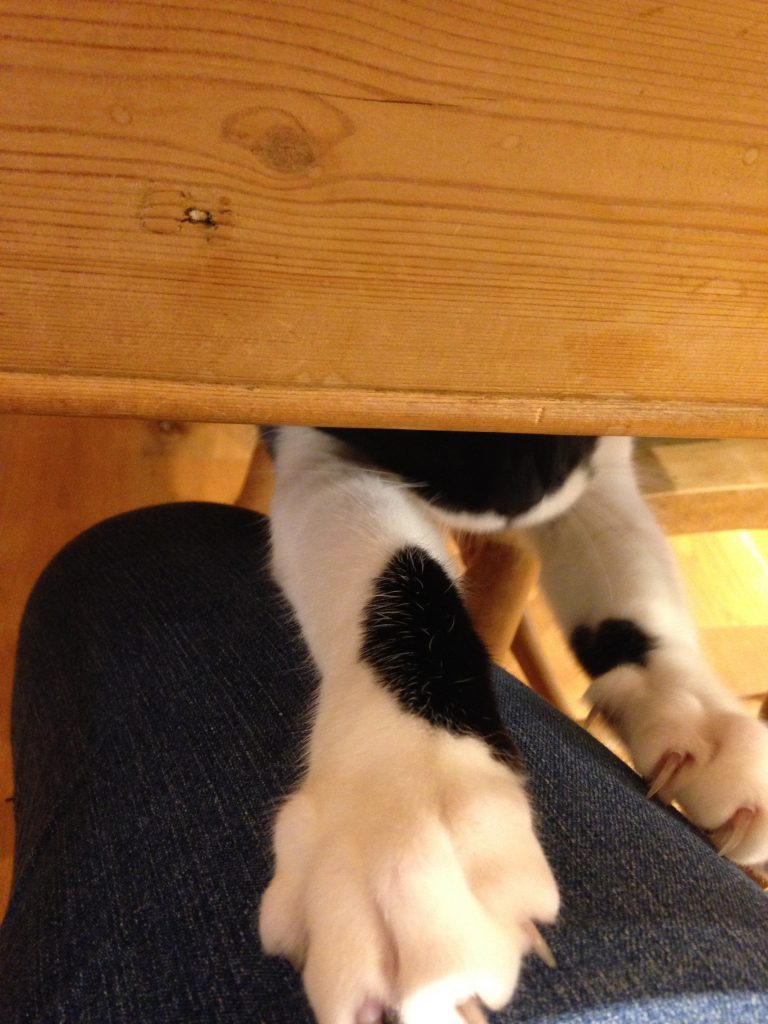 Of course, all of this snacking led him to put on extra layers of winter insulation. We liked to say that his chunkiness was due to his extra thick winter coat, and to be honest you can see the difference in photos of Summer and Winter Neville. His winter coat was so thick and so soft it was a dream to stroke and run your fingers through. If you tried to stroke Billy Tibbs as much as we did Neville, you’d lose a finger pretty rapidly. Fortunately, Neville not only put up with all of this physical affection, he seems to enjoy it too. He was the most huggy cat we’ve ever had, and was more than happy to be put on your shoulder and cuddled. With his long legs stretched straight out behind you and his head snuggling in close to your neck, I’m sure he enjoyed it as much as we did.

It wasn’t just people, Neville loved cuddling up with his brother Luna, although these cuddles would often turn into wrestling matches. Being so much bigger Neville would always win these physical games, although Luna excelled at “squeezing into the tiniest cardboard box possible”. This didn’t stop Neville from trying, and we have many memories of Neville “muffin top” Jiwa sitting in a box, maybe with one leg hanging out because there just wasn’t room. ​ 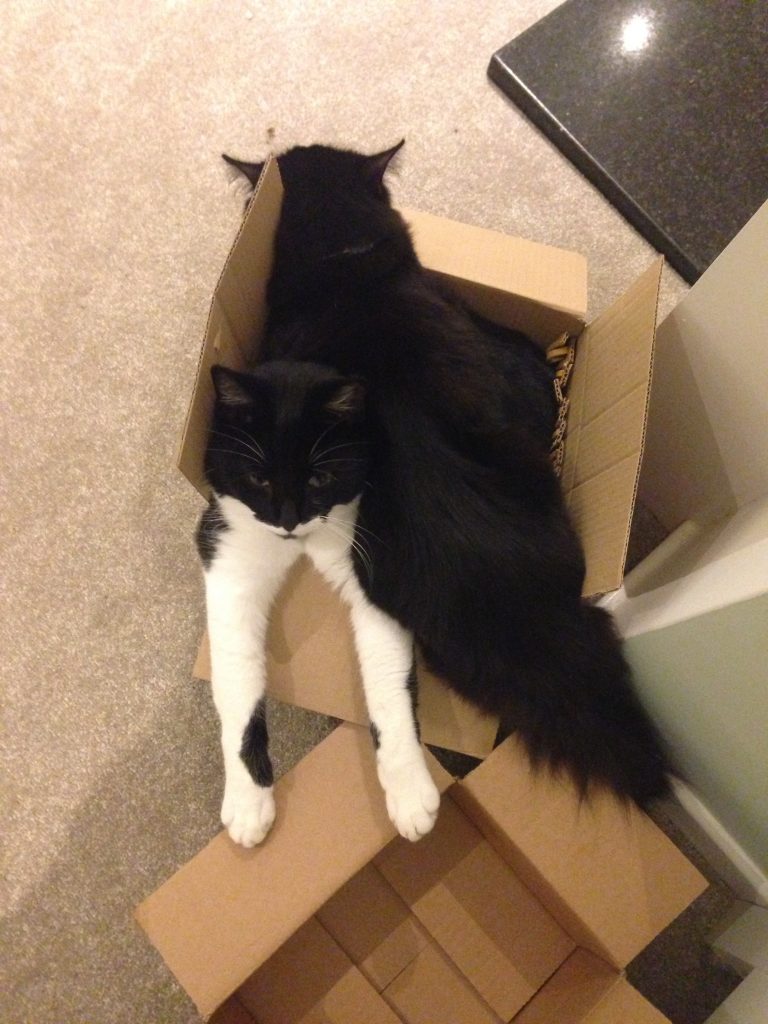 ​Neville also loved Billy Tibbs, and would follow him around the house and garden exactly like an annoying little brother trying to join in with a much older and cooler sibling. Billy greeted this adoration with the expected hissing, spitting and swiping. However, as time went on, he did relax his guard just a little when Neville was around. When he was asleep he made an easy target, and Neville would often sneak next to him and pretend to be asleep so that Billy wouldn’t attack him. As Billy relaxed and feel more deeply asleep, Neville would ease himself closer and closer until they were touching. We have a lovely photo of Neville asleep with his head resting on Tibby’s back leg. Tibbs is way off in the land of Nod, but Neville has a thought bubble coming out of his head saying “LOOK AT ME! I’M SLEEPING ON BILLY!!!” 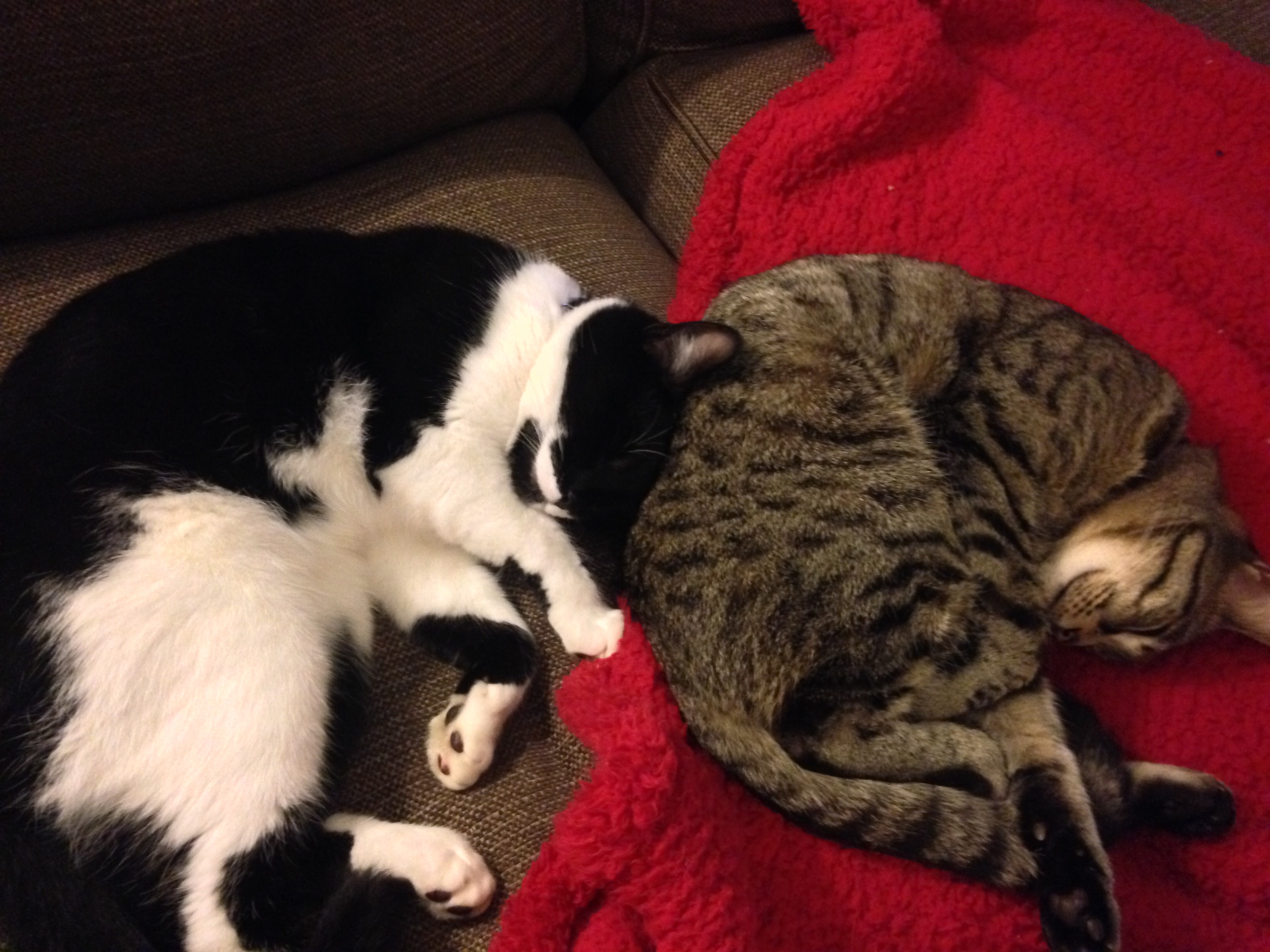 All of this fur (and insulation) didn’t stop him getting into mischief and scrapes. He would squeeze down the back of the big sofa, and we would only know about it as he pushed past the radiator and his magnet “dinged” on each of the radiator’s ridges. He would scramble up onto the roof of the house, although he did often have problems on the descent and had to be talked down on more than one occasion. As Sheni drove off back to Italy last Saturday morning, both Neville and Luna saw him off from the ridge of the roof, like a pair of furry dragons. He would climb the big tree in our garden, then look disgusted when Luna shot straight past him to swing from an even higher branch. On the morning of his death, he attempted to leap from a unit in the kitchen onto the back of one of the kitchen chairs. He never would have made it safely, but with amazingly quick reflexes my daughter managed to catch him in mid-air, much to his disgust and our relief. Fences would tremble and shake as he hauled himself over them. Plants were squashed when he slept on them. He would knock things over. I’m very glad he didn’t try and climb the Christmas tree this year, as it was wobbly enough without the addition of a large over excited cat. I’m extremely glad he didn’t chew through another brand new set of Christmas lights, and even more thankful that they weren’t plugged into the mains when he did.​

Quite quiet for Neville

I’m thankful for every minute that my son could call this large, soft, furry, naughty cat his cat, and devastated that we lost him so suddenly and so cruelly. I pray that the large (very large) Neville-shaped hole in our hearts and lives will heal quickly so that we can remember him with smiles rather than tears. I know that next time we take another cat into our lives our number one requirement will be that he or she is a huggy cat, because Neville showed us how wonderful a large armful of cat could truly be. 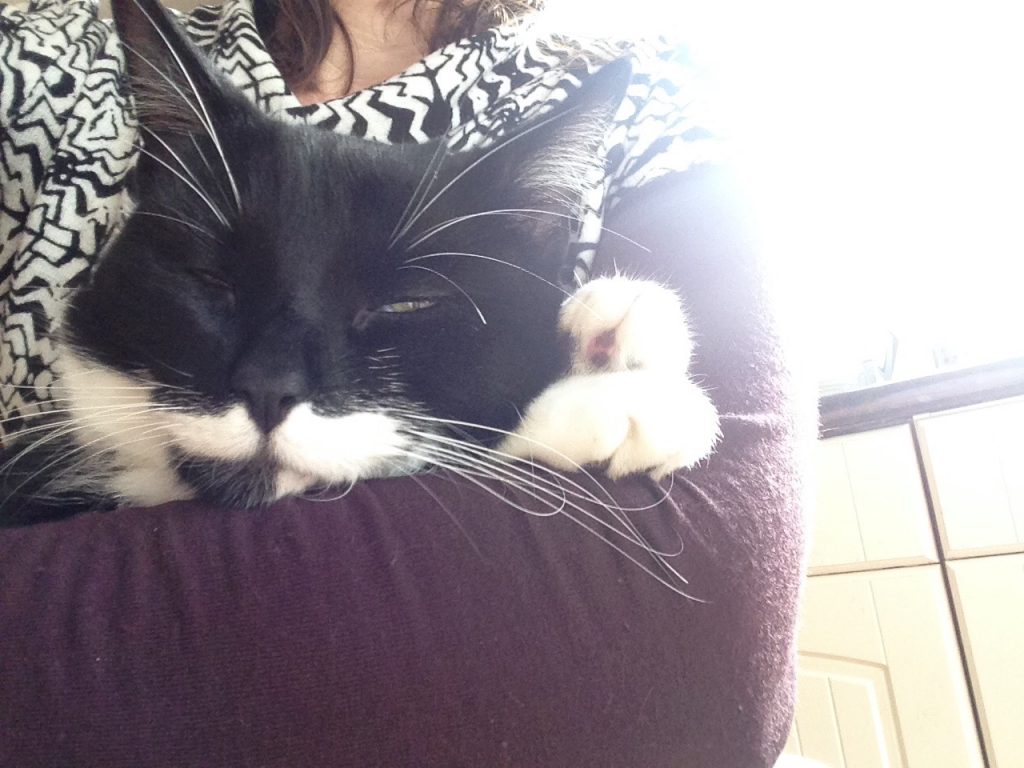