So I finally did it. In one week I managed a swim, two runs AND a cycle ride. Never mind that, one of the runs was a race. I know – get me, eh?

The bike ride went surprisingly well. I enjoyed it, especially as it just *happened* to include one of my favourite cafes* as a stop to warm up.

Unfortunately it was also a chance for me to prove as true the old saying “pride comes before a fall” by also including a stationary “couldn’t unclip in time” tumble off the bike in front of an admiring audience.

The swimming lesson went well, the first (short) run was fine and I was feeling quite enthusiastic for the Marshfield Mudlark on the Sunday.

First real race for nearly a year, so I was feeling nervous, and glad I would be meeting up with other runners from my running club – the race to be “last harrier home” was on! It was only as I stepped out of the car, I realised I’d left my trail shoes at home. Sigh. The recently-retired road running shoes I was wearing to drive in would have to suffice.

Fortunately it wasn’t very muddy at all this year, and there were zero cattle on the course (woo hoo!) it was just a lovely run through the countryside. Wearing a number. With a bunch of other people. In old road shoes.

Felt so good afterwards I was persuaded to enter another trail race. I’ve just noticed it’s described as “quad burning”. What have I done??!

Finally,  finally,  some real exercise that involves putting on lycra and going outside. Sadly, still no running, but today’s adventure was cycling. Even more exciting, cycling wearing cleats. Anyone who’s followed my cycling exploits will know I usually manage to fall off my bike at least once on any ride. Often whilst stationary, always embarrassing. After several months of using the toe clips that came with my bike, Mr B&T bought me some real cycling shoes and cleats.* This was a trip destined to end in disaster.

As an incentive we decided to cycle to one of our favourite cafés, Merkins Farm near Bradford on Avon. After a quick lesson in how to clip in and out, we set off. It was cold, and after twenty minutes my hands and feet were numb. My son (who was also in his new shoes and cleats for the first time) was setting a stirling pace as he had the scent of his favourite veggie burger in his nostrils.

After a cold hour we were there. The blessed relief to walk inside where it was warm from the wood burning stove was indescribable, but the pain from blood returning to my numb finger tips could only be described in naughty four letter words (so I’ll let you use your imagination). 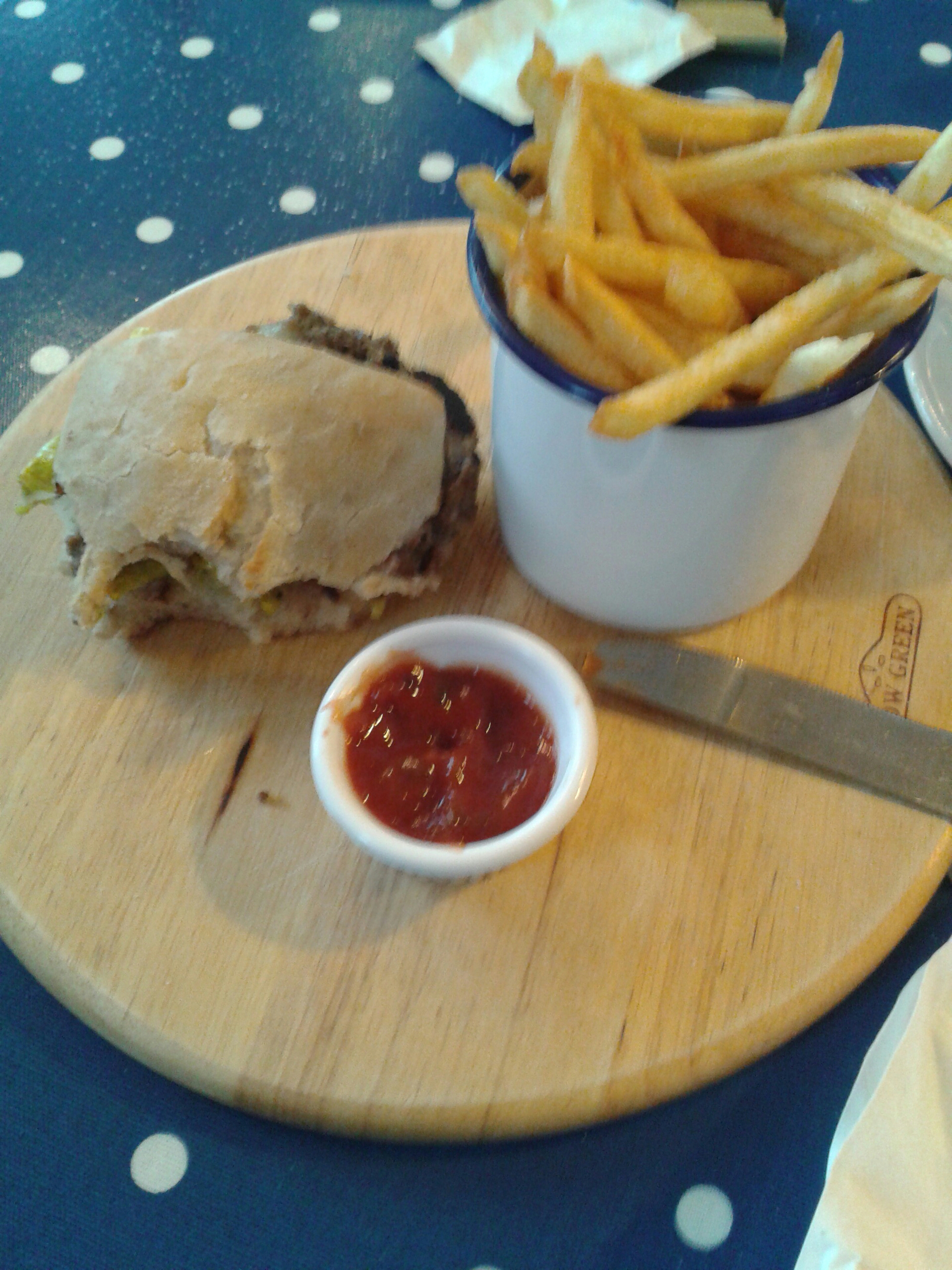 Well worth the cold ride! The cycle back home was much warmer (probably because we all had lovely warm full stomachs). When I uploaded my ride onto Strava I was delighted to see I’d won two QOMs (Queen Of the Mountains). When I looked a little closer, they are actually “2015 QOM”s, so I suspect I won’t hold onto these for very long! I am also delighted to report I didn’t fall off once and I managed to clip in and out with no problems. This was probably aided by the ever lovely Mr B&T shouting “UNCLIP” as we approached every junction.** My son did fall off once, as he got his unclipped foot stuck between the kerb and his bike, but he landed on a soft muddy verge so he didn’t hurt himself.

* Sometimes I think he doesn’t like me very much