So plan was for an easy run, the sun was almost shining, it wasn’t raining(!) so I thought I’d just pop round the village.

Couldn’t resist taking a few photos as I had my iPod with me. We live in a beautiful part of England.

Its no good, I couldn’t leave my race report as just a few words. So here’s a few more.

Well the day was sunny and warm all day, which was a little worrying. However, clouds gathered as the day wore on. I arrived at around 6.45 and was perturbed to realise I actually had to pay to park. Was very pleased to spot my race partner also at the Pay machine.

We walked down to the start area, which was really busy. For a little race, there were apparently 367 entrants, so maybe not so little. I saw my running group and went to say hello.

Me & RP (race partner) sauntered towards the start line, and proceeded to set off for our ‘little jogette’ warm-up. We discovered at this point that the grass had obviously been very long and wet, and had recently been cut so it was rough, bumpy and covered with the grass clippings. We arranged ourselves in the start-up melee, and made our plans for the start. The course crosses a field to start towards the river, and then goes onto a fairly narrow path (you have to run single file). We discovered last year that if you get stuck behind slower runners, you stay stuck as it’s hard to overtake. So this year’s plan was to make sure we didn’t get manouevered to the back before the race even started, and then as soon as the fog horn sounded, to sprint as fast as we could to the path.

The plan was working fine, RP pointed out to me a couple of people who were squeezing in front of us at the start so we could reclaim our places. However when the starting horn sounded, it was obvious that everyone else had the same plan as us, as it was a mad stampede! Not easy on the rough surface. A man stopped in front of us to look around, obviously for a running partner, so we had to skip around him, and then on our left a lady fell over, face first. Hope she didn’t get trampled!

We made it safely to the first corner, running way faster than either of our plans, so settled in there for the race. There was some over-taking as people sorted themselves out, and as I glanced behind I could see Mel was a couple of people behind me. He waved at me, so I carried on. I was feeling good at this point, although looking at the Garmin had me worried that I was going too fast. Still, I thought I could always slow down at the end.

Mile 2 has some uphill bits in it – up from the river bank to the road side, and then up a zig zag ramp to the cycle path. As I zagged, I could see Mel was zigging. He waved again, so I hoped that meant he was fine, and felt a bit guilty as I pressed on. Even with these slopes I felt great, and overtook a few more people on the wider cyclepath. As we climbed up off the cyclepath, I knew it was all downhill through a housing estate back to the river bank.

The third mile is back along the river bank on the single file path, mostly retracing our steps. By now I was starting to feel a little tired, breathing was a little more ragged, but to be honest not nearly as bad as I would have thought. I passed a few people, and nearly ran into the back of a couple of girls who stopped right in front of me. As we reached the corner with just the field to cross to the finish line, one helpful marshal shouted “Only 400 metres to go. Time to turn it on now!” I thought “I HAVE turned it on!!!!!” I chased a lady across the field but as she heard me come up behind her she put on a spurt to cross the line just in front of me. As I ran to the finish ‘funnel’, 2 of my running club were there shouting me in. That was lovely, as for a change I hadn’t dragged my family there with me.

As I shuffled through the finish area, I could just see RP coming in behind me.

By comparison, last years’ time was 30:20, so I took 2 minutes 34 off my previous PB. Still VERY pleased – It felt fast, *I* felt fast! It was hard work, but it never felt uncomfortable. Yes I was tired at the end and desperate for a drink of water, but I wasn’t gasping or falling to the floor with exhaustion.

Overall, very VERY pleased – and amazed that a schedule designed to speed up my longer races is having such a great effect on shorter ones too (thanks AH!)  3M recovery run the next morning, and apart from legs feeling generally tired, I had no aches or pains which really in amazing.

Roll  on the next one!

So after nervously panicky all of Wednesday about the Chippenham harriers 5K River Run, I am more than pleased to announce it all went well. Very well. Really well. Astoundingly well, actually.

To cut a very long story short, after frightening myself with a pace to aim for of 9:12 minute miles, I actually managed to average 9:00 Minute Miles, My last mile was run in 8:51 – never had a split that began with an 8 before!

My lovely running partner also got himself a sub 30 PB, although I’m afraid I did abandon him (sorry!)

Now I really must concentrate on some longer runs, ready for the two half marathons on consecutive weekends I have planned for September. Don’t think there’ll be so many splits starting with an ‘8’ in those!

So if, like me, you only run one 5K race a year, obviously there’s a lot resting on this one, short race. The chance to set a new PB that will last for a whole year is the one that springs first to my mind. So, no pressure then!

So here’s how I’m approaching this momentous day. Which is, in fact, today. At 7.30pm.

At this point, I find myself, mouth open, thinking “9:12??????” Best put the kettle on and have a think about that. You see – this sounds fast to me – seriously fast. Sip tea, and think positive thoughts.

Feeling a bit better now. Warn running partner by text that pace to aim for is scary.

Check on website starting time of race, look at photos from last year and remember that there’s actually quite a lot of running on grass, and paths. Oh, and with the recent very wet weather, maybe a River Run is not the best race to be doing?

Give myself a good talking to again, and decide to stick to the recent advice I read on ‘how to pace a 5K race’. It was basically “Start out as fast as you can, and then just hang on for the finish line.” 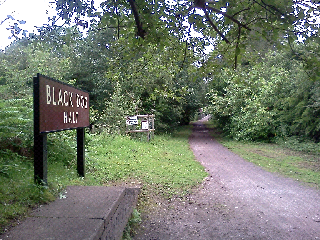 So if you want a flat LSR route, what better choice than a disused railway line, which has been converted into a cycle path? Straight(ish), flat, very pretty, and still with a station on the line. ‘Black Dog Halt’ entranced my son when he was little, even without any tracks or trains! 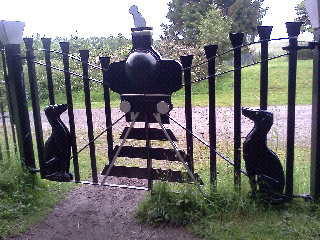 In these inspiring (and flat) settings, my ‘as long as its at least 10 miles, and maybe 11?’ run turned into a 12.5M run. Ending up circling the housing estate I was parked in, in drizzle, and very hungry. Worked out if I’d carried on to 13.1M I’d have been at my old HM pace, and this was without proper LSR breakfast (wot no porridge), and with no gels or ShotBloks en route.

Pretty pleased with myself, actually – roll on my Half Marathons in September!

Oh hang on – a short 5K to get through first…

What a beautiful night for my first race since the London Marathon!

It had been warm and muggy all day, definitely not the best racing conditions for me. Thankfully as the afternoon drew on the temperature dropped a little, and a blustery breeze was making it feel a little cooler.

On arriving with about 25 minutes before the race started, I had plenty of time to park (about 10m from the start line) and walk to the Race HQ (the Scout Hut). I collected my number, queued for the toilet, and then still had time for a little warm-up jog. Gotta love this little local races!

Starting at the back means I missed most of the pre-race briefing, but I did catch a bit about “having to run on the common for further as the original route is like a swamp” and “the grass is so tall we’ve lost the footpath”. Such a change from London!

I found the footpath okay, it was a little soggy in one patch, but all okay. The lanes were mostly quiet, a few of the kilometre markers had blown down, and the water was at nearer to 6K than 5K (and by then I was desperate for a drink!), but it was a great race. For most of the way round I was following (in the distance) 3 ladies. I was determined to catch at least one of them before the end. Sure enough, I was gradually catching them up, until on a nasty little slope just after 5 miles I overtook two of them. I was delighted!

On the final run in along the Common towards the Finish line though, I could hear someone coming up fast behind me, and could see a shadow of someone approaching. Curses! I thought, but sportingly moved to the side so they could overtake. Yes, it was one of the ladies I’d overtaken doing a magnificent sprint for the line. Well done, Corsham!

On this straight I saw my lovely husband, and ace race photographer on the other side of the road. What a good photo from his new phone! Also my son who was determined to beat me to the line (another sprint finish!)

What a lovely little race. Lovely to know the race fee is going towards the local Scout troop with their lovely little Scout Hut. Great to run in a small race where you can park 20 seconds from the start line. Fantastic to run with such friendly runners, who even apologise for beating you on the final straight. Oh – and a great medal too (always a bonus).

Oh – and didn’t I mention? 59:26. Under the hour, which I wanted. Not a true PB, as I ran faster last October. However, since that race is run around the Castle Combe motor racing circuit (completely flat and smooth) its always felt a bit of a cheat. So I feel I have an official ‘road’ sub-60 PB now.