After starting a long and dull race report (you know the sort – just look at some of my early reports!) I decided I was even boring myself and I’d better start again. Here goes.

The amazing thing about the Bristol to Bath marathon wasn’t the start, or the finish, or the support between the two. It wasn’t the number of Portaloos or water stations, or the weather or even the medal. It was the sum of all these things, and a little something extra – how I felt on the day.

As I’ve already written, I loved every minute of this race. I didn’t look upon it as a race, but as a last long run. Bizarrely unlike most people I read about, I love the long runs in my marathon training – all on my own, carrying my stuff, really feeling like I’m travelling around where I live. I took this attitude into last Sunday with me, and it did me proud.

I had some lucky breaks, like finding 2 Portaloos with no queue just when I needed them, at mile 3 and mile 17-ish. Also you know that moment when you’ve just taken a gel and your mouth is really sticky and you really really need some water but you had wrongly guessed where the next water station was? Well, imagine at just that point hearing your name called, and seeing a friend offering you some water (Thanks Nat!).

I had considered taking my ipod along for the tough bits where I had anticipated little support (between the two cities, including the two big hills). I was glad I abandoned this idea, because the support was amazing. Plenty of people around me were listening to stuff, which was really annoying when I was talking to them, only to be ignored. I was running at one point in Bristol next to a man who was wearing a running top emblazoned with the Welsh dragon. A spectator started loudly singing the Welsh national anthem at him – but as the Welshman had earphones in he completely missed it. What a waste. I, on the other hand, stayed completely in the present listening to the cheers and applause, and enjoying reading people’s banners. My particular favourite was held by a bored looking teenager and read “IT WASN’T EASY GETTING UP EARLY TO MAKE THIS BANNER, EITHER”.

The route was flat and hilly. The first half was mostly pancake-like, with everyone I spoke to anxious about the second half. I was mentally prepared to walk up the hills if I needed to (I was expecting to if I’m honest) but in the spirit of just taking everything as it came when I actually got to the hills I felt fine and just carried on running.
All the way around I could see the flags of the 5 hour pacers just ahead of me. This was perfect as my ‘Gold medal’ goal was to finish in 5:15 (which means averaging around 12 minute miles) and if I kept them in sight I knew I was on track without having to keep on looking at my Garmin. My ‘Silver medal’ was to beat my Brighton time of 5:25, and ‘Bronze’ was to finish with a smile on my face. With the prospect of the hilly second half I told my family I expected to take around 5:30, so they could plan getting into Bath without having to hang around for too long.

As we hit the long Kelston Hill at mile 20 I slowed to a walk to pull out my sports beans (not a euphemism) and then ploughed on up the hill slowly running and chewing. I tried visualising the hill as actually going down rather than up to see if it helped. Actually it did – don’t know what was in those sports beans! I could see the now much smaller group of people with the 5 hour pacers were walking up the hill. I gradually caught up with them until we all reached the top of the hill and we started running together.

For the first time there were the most amazing views of Bath from the top of the hill. We could see it! It was only about 4 miles from here. I overtook the 5 hour group and caught up with a couple of Run Mummy Run friends who had been run-walking from the start. At the next hill I left them behind as they walked and I ran. I smiled, and ran, and smiled, and ran a bit more, and realised I was actually feeling sad that this amazing run was coming to an end.

The downhills were sore on my right knee by now but I was excited to be back in Bath. Running down streets I usually go shopping along was an amazing experience, as was seeing the bemused foreign tourists taking photos of exhausted runners against the backdrop of Bath Abbey.

The sneaky hill just before we entered Victoria Park was cruel, but seeing the mile 26 marker was enough to make my throat tighten with emotion “Don’t cry yet!” I sternly told myself. A glance at my Garmin told me I was definitely on for an amazing time, which made a sob rise inside me again. “DON’T CRY YET!!!” Into the park, crowds of people lining the barriers, spotting the finish line ahead, “Still don’t cry”, suddenly hearing “LUUUUUCCCCYYYY!”, turning and seeing my daughter waving frantically at me. She was the only member of my family who had made it to the finish before I did, despite initially not being able to find the park on the way from work. Amazing!

As the sobs threatened to escape, I roared over the finish line, for the first time ever feeling justified in raising my arms to the sky. My official photos of this moment might not be pretty, but they’re the ones that best tell the story of this run. 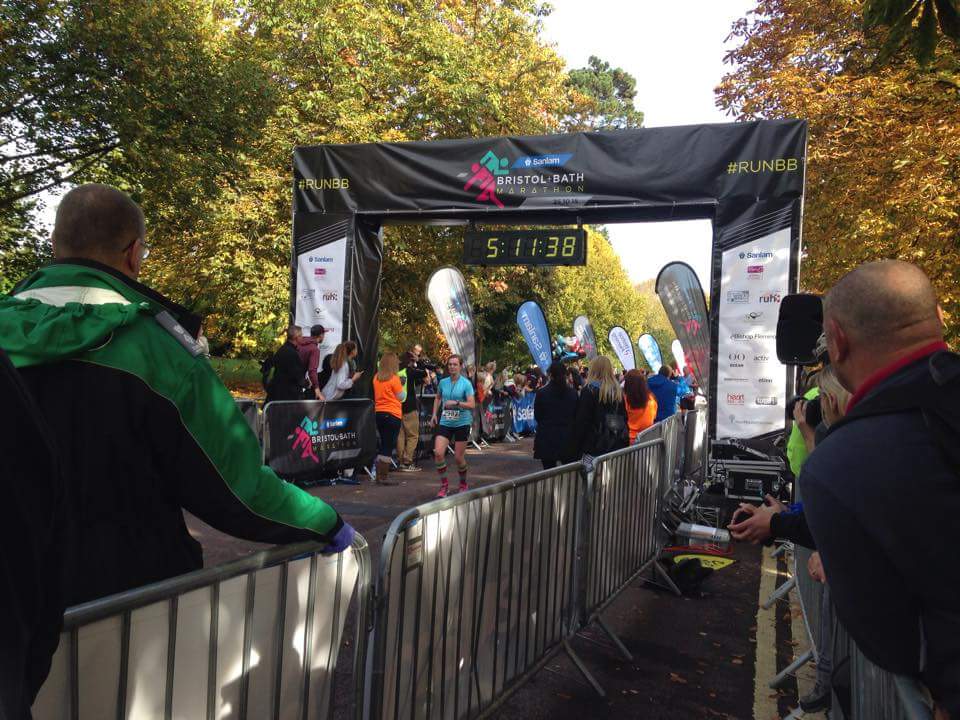 Fabulous. I beat even my Gold medal target, so I guess I won Platinum. I finally felt like I’d run the marathon I should have been capable of for a long time. Nothing else to say, just more smiling.