After my stunning ** race last week, where I had a goal pace which I managed to stick to (below 9:30 minute miles) and even managed a sprint finish, AND felt strong going up the hill, I decided this morning was the day to try and chip away at this year’s parkrun times.

My parkrun PB is 25:52, which sounds a pie*** in the sky target at the moment and actually dates from May 2015, but if I can keep on chipping away at this year’s times who knows how close I’ll get. Current parkrun times have been around the 29 – 30 minute mark, but with my recent race times I thought SURELY I could run faster than that? Yes the course has been muddy, yes I’ve been doing a lot of chatting, but come on Lucy!

In February I finally managed to get a time under 30 minutes again. Two seconds under, but hey it all counts. 3 weeks ago, I hauled myself under 29 minutes. Three seconds under, but again, who’s counting (apart from the timekeepers and my Garmin). Last night I calculated that if I ran under 9 minutes per mile I should be able to scrape in under 28 minutes. Anything’s possible the night before parkrun!

This morning I told my friend Valerie about my plan, and she immediately said she’d run with me as she’d also love to dip under 28 minutes again. With the pride of the VW50-54 age group resting on our shoulders, we sprinted off from the start with the best of them. 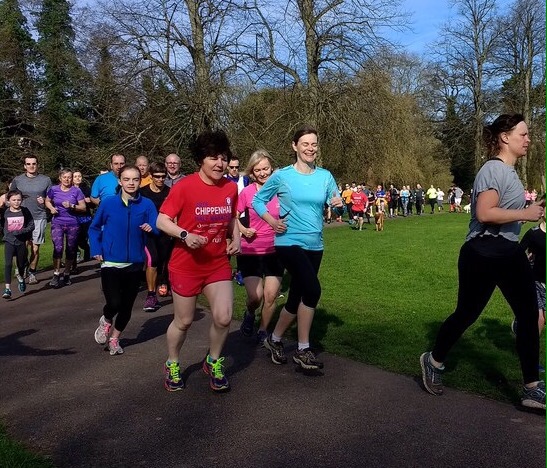 Continually glancing at my pace meant I consciously overtook people when I would usually just drop in behind them (it feels like pushing in – I’m much too British to enjoy this).  Valerie stuck with me, and we even picked up her husband on the way round. Ignore all tales that this meant we forced Valerie down the middle of the path and through the splashy puddles. It was unintentional, but she definitely had the muddiest legs at the end.

As we made it to the straight that leads to the finish, Valerie told me that she was done, and to push on without her. I gasped “okay” and proceeded to overtake another couple of runners. Being so British, and disliking people who actually manage a sprint finish (despite last week’s effort), I shouted “sorry!” as I ran past.   One of them said “You look like you’ve got plenty left in the tank. Go for it!” which has to be one of the most pleasing things anyone has ever said to me when I’m running. 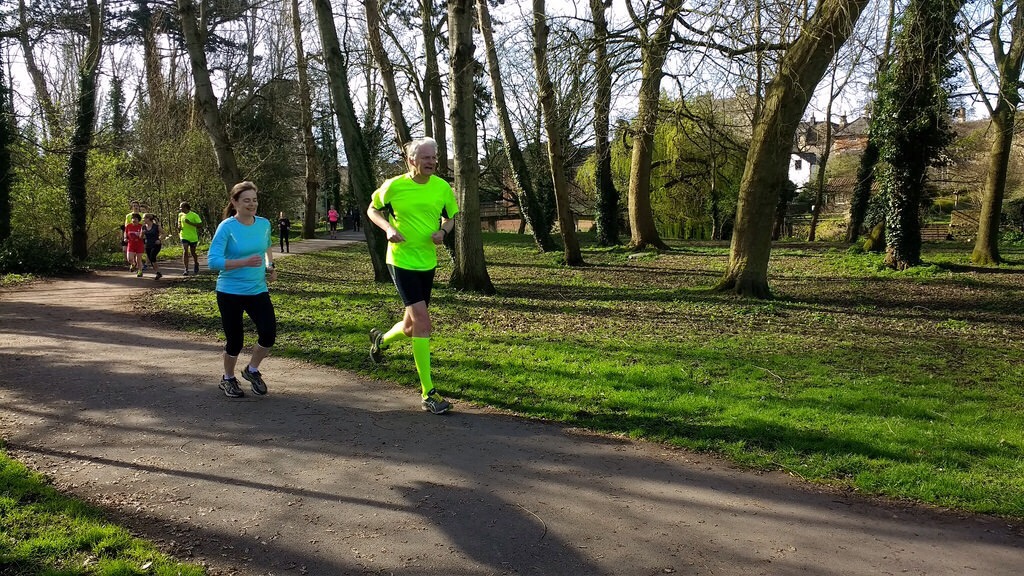 I was overtaken just before the line by a small child, who was being accompanied and coached by a lovely young man called Luke****. The encouragement Luke was giving him was marvellous to hear, particularly as Luke is an amazing runner who was going much more slowly than he usually would in order to pace the boy. I was trying to use some of his advice myself, but as they charged past me I felt like applauding them both! This was heart-warming, parkrun at its best, stuff.

I finally crossed the line in 27:45, with Valerie only 7 seconds behind me, as 1st and 2nd in our age group. Yay – go us! Although I was tired at the end, I was in no way completely shattered. As the nice man said, I think I did have something left in my tank after all. Just maybe this running lark just needs some confidence in your own abilities, as well as training, practise, good shoes and fab running partners (not much to ask for, really).

I was wondering what to aim for next, and then I remembered that next week is a “naked” parkrun (??!!!!!) where you have to predict what time you’ll finish in, and then run technologically naked (i.e. no Garmin!) to see who can finish closest to their predicted time. That could be very interesting!

Since my last post, I have been a little busy. There was “that” large birthday to celebrate, a new age category to rise up* into, a parkrun that I dragged family and friends along to, many presents, delicious food, and cake. Much cake. So much cake.

After all that  carb loading I’ve staggered around a few runs, and also managed my first road race of the 2017 road racing season. The Highworth 5 was on Sunday 19th March 2017, and before we go any further I should clarify it was a 5 MILE race, not 5 kilometres. The poor chap I spoke to in the first mile was wishing there’d been some clarification – he’d turned up to his first ever road race, after a longest run of 3 miles, thinking he was in a 5K race. It was a simple loop around the roads and lanes, with a sneaky hill at 4 miles. How the organisers had arranged for gale force headwinds for the last 2 miles (including the uphill section) was a puzzle to all of the runners. I have included an informative slide explaining my pace vs. conditions:- 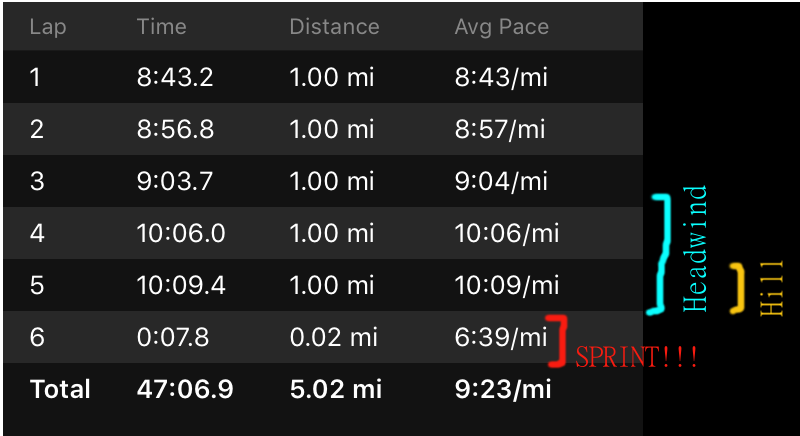 What was also a puzzle was why a runner thought it was okay to shadow me all through the windy section, thus using me as a windbreak. I could hear her behind me, and as I glanced behind could just see the red of her top. As we entered the playing field for the hated “rounding up to 5 miles” section. I could still hear her behind me, and had a horrible premonition that she was about to sprint past me and finish in front of me. Now I don’t do fast finishes, I am the runner people love to catch on the line, but the bit was firmly between my teeth now. I was seeing red, not just the red of her top,  and thinking of our club’s Tuesday nights Efforts sessions I sprinted for the line. The satisfaction of beating her by a second will last for quite some time. As will my delight in my race momento.

* I’m choosing to think of it as a promotion