So after posting a very short activity for New Year’s Day, I also managed a swim on the 2nd (to test out one of my Christmas presents – more on this another time!). After a strong(?) start, I then returned to work on the 3rd and Janathon went awol. PAH.

On a more positive note, I volunteered to run as a 33 minute pacer at parkrun on Saturday 5th, and I am pretty pleased to say I managed to achieve a run time of … 33:00 minutes. I may have peaked at pacing just 5 days into the year.

Another success so far this year has been my participation in Veganuary. My attempts at being vegan again, after a break of about 23 years, came a cropper in December when a work colleague gave me a milk chocolate advent calendar and I couldn’t hurt his feelings by not eating it. (I was also delighted to finally feel like part of the team. I’m so needy!) Veganuary was just the push I needed to start again, and with my daughter accompanying me, I think I’m doing pretty well this time. Well – apart from *those* crisps – who in hell puts milk in Thai Sweet Chilli Crisps? Walkers Sensations- that’s who. Double PAH!!

I’ve also decided that as well as trying to get more sleep, I need to start feeling generally “well” again. So many odd symptoms, including bad sleep, are really starting to get me down. I’m certain they’re all just menopausal “it’s my age” stuff, but I’ll likely punch anyone who says that to my face. (PMT-type rage is just another symptom). So – I’ve purchased a box of horse tablets for “women of a certain age” and I’ll try and remember to force one down every night. Worth a try I reckon.

I’ve found that when I’ve dragged myself out for a cold, dark run after work then I sleep much, much better that night. I’m using this as a successful prod to get myself out there after work. (I can do it as long as I don’t sit down when I get in. If I sit down, I’m done for). As an added bonus, I feel like superhero running in the dark on my own, wearing my extremely bright chest torch. Who doesn’t want that!

Does anyone have any top tips that might help with sleeping, or with coping increasing age? Please share if you do!

After a rubbish end to 2018 (seriously- who wants to be ill for 3 weeks including over Christmas and New Year? Nobody – that’s who) I decided I’d better kickstart 2019 with Janathon.

So January 1st – 0.4 mile walk around the block just before Doctor Who. It’s a real activity- it’s on Strava and everything! I also got to finally see the most decorated house in the village this year which cheered me up immensely:-http://www.blackandtabbyruns.co.uk/wp-content/uploads/2019/01/img_4218.mov

So it suddenly struck me, I never did write up my last two days of Janathon. Seeing as this means I’ve now failed at Janathon I shouldn’t worry about it, but I’ve already failed once and continued on so here goes.

After Slaughterford 9 I was worried my legs wouldn’t be speaking to me. However I managed to keep moving and on both evening completed Janathon by performing “tooth brushing squats ” thus doing my daily exercise whilst demonstrating superb multitasking skills.

Okay, so my last 2 days weren’t as exciting as I might have hoped (and have proved that good things don’t necessarily come to those who wait), but at least I’ve proved I’m a completer/ finisher.

Slaughterford 9 is a hard off-road race. I’ve run it twice, but as it’s organised by my running club in the last few years I’ve had to volunteer to marshal instead.

This year the race is part of the Wiltshire Off-Road League. The club runners who have run the previous four races in the league this year were allowed to run it, as a very special honour. And to gain points for the club in the Club championship, of course.

We still had to help out, so all of us Harriers racers were out bright and early on car park duty. The weather was cold, it was faintly drizzly, and it was very soggy underfoot. At about quarter past nine we escaped in order to strip our many layers off, collect our race number, assemble for the team photo and to try not to shiver too much.

The race has a mass jog down to the start line, because everyone has to cross the very busy A4 to get there. After shuffling myself towards the back, with very little ceremony we were off. The early part of the race is practically on home turf for me, so I knew exactly where to walk and where to push on. I looked longingly up the footpath which leads to home, and resolutely followed the racing line.

I don’t want to describe every muddy, sticky, squelchy step of this race, take it as read it was hard. Instead I’ll let the pictures speak a thousand words:-

The best bit (slight exaggeration ) was getting ready for bed and realising I didn’t still have to perform a random exercise whilst cleaning my teeth for Janathon.

Day 27. The day before a big race. A day to be spent resting up, hydrating, and eating well. Probably not a day to spent at the annual awards evening at our local cycling club. It had to be done though, as my husband was being presented with a clutch (well, armful) of awards. 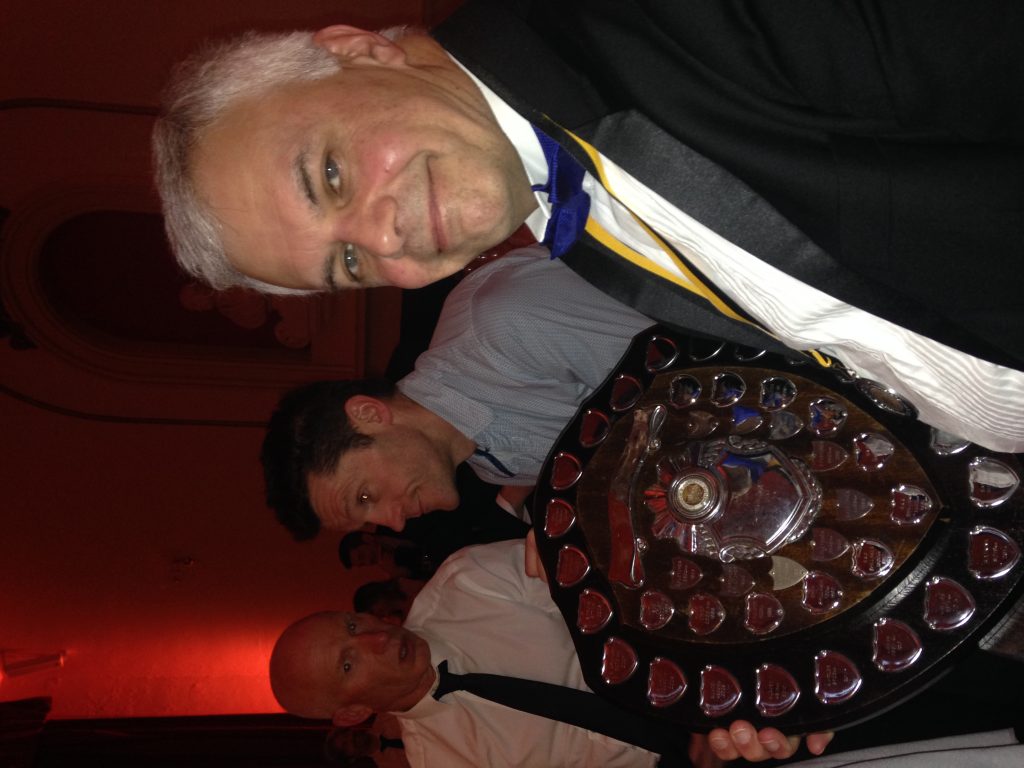 I did leave early, and I was the driver so wasn’t drinking, so it wasn’t all bad. Unfortunately I left before the dancing started, so tonight’s activity was toothpaste flavoured squats again.

Friday – a day with a late start at work, a daughter to collect from town, and a race to panickly prepare for. No problem.

I set off for a 3 mile run, to see quite how wet and muddy the countryside was.

It was very wet and muddy.

I managed 2.7 miles before I was summoned to collect my daughter.

After yesterday’s dangerous multitasking, tonight I hit upon a safer alternative – squats whilst brushing my teeth. Not on the top stair.

Okay, getting desperate for things I can do for Janathon whilst getting ready for bed.

Tomight, hit upon standing on my top stair doing heel raises & lowers whilst brushing my teeth. Whilst I thought this was impressive multi-tasking, it was also fairly dangerously wobbly so I don’t think I’ll try that again.

After Monday’s excitement, today was back to work, and I was back to a 60 second plank just before bed.

There’s nothing like collapsing into bed with shaky arms and a quivering core!

After the ignominy of forgetting Janathon yesterday*, and with an up coming race at the weekend, AND with having a day off, I thought I’d better get myself out for a run.

A lack of enthusiasm, along with a huge list of jobs to do (on my “day off”) meant I decided I just get out for a shorter run, but with some hills in it. Off I set down towards Slaughterford, with the sim of repeating the short but steep hill 3 times. Around a bend I was confronted with a puddle. An enormous puddle. In face, let’s not mince words, it was so large and so brown it was definitely a lake. I cannot tell a lie I did briefly consider turning around, but the effort of thinking of another route seemed worse than the effort of ploughing on through,so ploughing on it was. It was cold, it was muddy, it was over my ankles grimness.

I completed my 3 hill repeat. Yes there was walking, yes there was topping to give directions to a motorist who didn’t trust their satnav, yes there were puzzled looks from the workmen at the bottom who saw me three times, but I did it.

As I headed back towards the swamp, I stopped to take a photograph to prove just how horrible and huge it was. I was heading back through it, right in the middle, just as the bow wave was coming back over my ankles, I saw two other runners come round the corner. They stopped, watched me wading through, then told me they weren’t going through it and they were going to turn around.

“Did you run up that hill?” they asked admiringly. “Oh yes” I modestly replied. “And walked a bit” I honestly added.

“Are you training for Tough Mudder?” they asked.

*I know, I know – surely it consumes my every waking moment? It’s totally inconceivable as to how I might have forgotten?!