I’ve been running for 6 years, slowly improving, but now I think I’d like some help, advice, support, and yes running friends. So what does everyone recommend? Joining a running club of course. Simple.

However, for this runner, not so simple. You see, I’m shy. Yes I know shyness is only cute in small children so I’m around 40 year too late for that. I know I probably don’t come across as shy, but that’s years of managing to act a part when I need to. Acting the clown is a brilliant disguise for shyness (although I draw the line at the face paint and red nose). For things like job interviews I can put on self confidence with my suit jacket, but it’s such a relief to shrug it off again several hours later. I love to tell a good story (and if it’s not good it doesn’t necessarily stop me) and it just happens to be a way to fill air space to stop me dithering about if I should be talking, or what I should say, and what was the other person’s name again??

I keep being told how friendly running clubs are, how I’ll really enjoy being a part of a club and running with club mates on runs and at races. My husband joined our local cycling club a few years ago and just loves it. He has made so many new friends that I worry a party we’re hoping to hold later on in the year will be swamped by Wheelers. With this in mind, I have been a little bit brave, and e-mailed the running club about going along to try a session to see what it’s like. After my original e-mail was retrieved from the Spam (not a good start), I’ve been told to come along tonight and

So I need to approach a big group of runners, who will all know each other and “Just ask for a committee member”. I can feel my shyness spilling out, threatening to swamp me like a heavy blanket, muffling my thoughts and rendering me unable to move or act. I’m in danger of inventing an excuse and simply not going.

And now I feel angry at myself. I WANT to join a running club! If they’re horrible and unwelcoming, I can always try a different club. I’ve had an offer to go with a lady to next week’s session, and she seems really lovely, but I don’t know her either and I think I should try and go tonight because I’m too old to feel like this.

Running has taught me many things. It’s shown me that I can do so much more than I would ever have imagined. It’s shown me I’m much tougher and more resilient than I believe I am, and that I’m incredibly stubborn at times. I’m good at just keeping on going, which is more of a life skill than I ever would have believed. I can go out in public in tight lycra and (mostly) not care, (although I do sometimes catch sight of myself in a mirror and mentally raise my eyes heavenwards with a sigh). It’s also taught me what a great group of people runnners are, how supportive of each other we can be and how encouraging.

If you’re reading this as a runner, or as a fellow “shy-be” or simply as a nice human being please send me some support and encouragement to put my self-confident face on (along with my lycra and trainers) tonight and get myself along to running club. It can’t be any harder than running a marathon, can it?

Sitting in a room full of keen looking people,  ipads and pens poised, whilst feeling sleepy and listening to a fit looking woman talking about running across the USA. On trails.  Surely I’m having a nightmare, or am I sat in the wrong room? What am I doing here?!

Well even a few years ago I would have been in the wrong place.  This weekend though I was sat, in the correct room, at the Write This Run conference at the Running Show. Despite an early start I was being inspired and terrified in equal measures by the speakers that Laura and Liz, the organisers, had lined up.

It would take waaaay too long to  write about all of the speakers, and they do deserve mentions because they were all fascinating in their own way. However I’ll just mention the people I found especially interesting and inspiring.

The first session was entitled ‘Be Inspired’, and started with Jen Bradley talking about running across the USA, on trails, in the summer of 2012. 80 days of continuous running averaging 42 miles a day. Imagine considering a day when you ‘only’ run 31 miles to be a rest day, and you’ll get an idea of the scale of the journey. After a casual remark to a friend started the whole adventure, Jen’s first words of advice were “be careful who your friends are”. Her method of ensuring the success of the project? Having no contingency plans.

Still reeling in admiration after Jen’s tales, we next heard Sophie Walker talk about how and why she started running. She was used to having a stressful and dangerous job working as a journalist for Reuters, however nothing was as scary as the day her daughter, Grace, was diagnosed as being Autistic. Running helped her find the strength and drive to get the help that Grace needed.

She started blogging about her running, and about life with Grace, and both found it immensely helpful. As Sophie said, “running and writing saved us”. It was lovely to see that Grace had come with her Mum to the conference, even if like a typical pre-teen she sat at the back with her headphones in!

Simon Webb followed, talking about being a blind runner, and how he’d researched the route of the LondonMarathon in order to find out the stories and histories of the places the race goes through to give him something to think about whilst running it. His best tip on beating boredom whilst running was to find an interesting person to run with. After all, he joked, there’s no ‘loneliness of the long distance runner’ for him – he always has someone with him! His book wil be published soon.

After a tea break the conference continued with a session entitled ‘Blogger-Brand Relationships’. As a relatively new blogger, and one who is still struggling to write a decent race report, I didn’t really expect to hear much of any relevance to me. Surprisingly though I still learnt a few useful tips that I will be implementing into the blog soon. Who knows, maybe I will be at the stage of talking to brands one day! If I am, I shall be taking careful note of what Muireann Cary-Campbell as I was seriously impressed with how someone so glamorous could actually be a keen runner and highly successful blogger as well.

Lunch break gave me a chance to stroll around the stalls at the running show and eye up the bargains. With a house extension under way any expense has to weighed up against ‘house-y’ stuff. Jacket vs. Door handles. Running tights vs. utility room sink. Sigh. 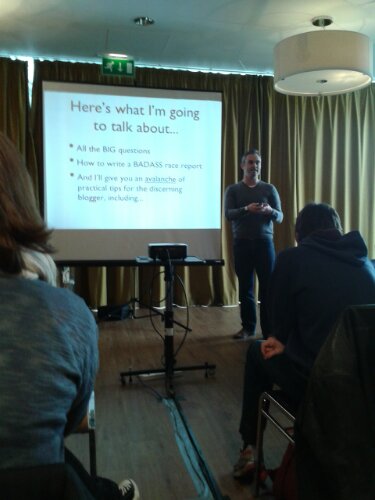 I returned to my seat slightly depressed from my window shopping, but excited because next up was the session I was really interested in – ‘Better Blogging’. I sat and waited to hear the secret of ‘how to write a badass race report’ from Jody Raynsford  and to find out all about Mr Twit and the classroom wasp, from Jonny Muir. First thing I learnt from Jody was that my current style of race reporting is bad, rather than badass. Fortunately he also gave us lots of ideas on how to improve. Read my next race report to see if I manage to add colour rather than description. Thanks to Jonny I know now to ‘look for the nugget’, and that ‘people care about people’. I also know who Mr Twit was.

The final session of the day was entitled ‘Run Strong’ and was focussed on injury, recovery and utter madness. Robbie Britton currently runs for Team GB and is ranked 17th in the world for Ultra Marathon running. Robbie was relaxed, laid back, very funny and seriously bonkers. This was a dangerous talk to listen to, because it made me think “This ultra running stuff sounds easy – I could have a go!”. However as the talk was actually entitled “Suffering is all part of the fun” I guess that’s a good warning that its maybe quite as easy as Robbie made it sound.

So a day full of listening to such awesome people was enough, yes? No, actually, as well as all the above, the day was a fantastic opportunity to meet fellow running bloggers and chat. And chat. And drink wine at the after party, and do more chatting. I got to meet some bloggers I’ve followed for some time, and also met some people I’ve not (but who I need to add to my Blog reading list!) The moment that summed up the day as a whole, was hugging the Veggie Runners  (both of them!) whilst declaring “I’ve found my people!”