So I ended up at this gateway… 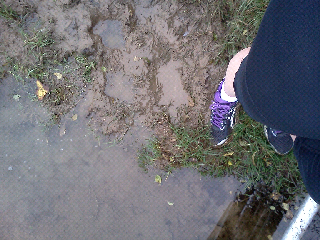 Having to wade through here… 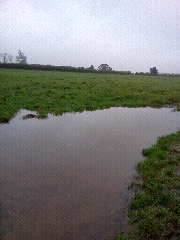 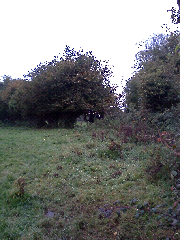 Sadly the camera on my phone is too rubbish for you to be able to see that peering through the hedge is a whole herd of bullocks. I spotted them in the field that the footpath runs through, and took a tactical long cut into the next door field. As I ran with the hedge separating us, I could hear the whole herd galloping (do bullocks gallop? Don’t know, but it sounded like it) on their side of the hedge, parallel to me.

Somewhat scary, not least because a woman was killed by a herd of cows recently in Chippenham, and also because I’m a complete wuss.

Must go and wash my new trainers. Again.

Okay – so it made me laugh! (And is just an excuse to post a photo of my new shoes again!) As you were… 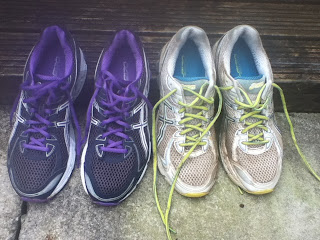 Checked my Garmin stats, and saw I’d run 385 miles in my Asics GT2170 turquoise and lime beauties. This included the London Marathon, a 5k race, a 10k race and 2 half marathons.Was it time for some new shoes?

Well, odd twinges and aches are most unwelcome after running (not going to name them as I’m in denial) but in my opinion can often be cured by new shoes. Sometimes. Maybe. Worth a try, anyway. 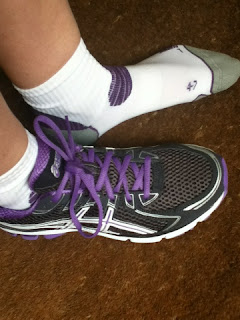 So I ordered the shoes, same as last time as these have been so good. Went to collect them, and found these purple beauties waiting for me. Fantastic! (and a much more practical colour for Winter training!)  Thought they deserved a new pair of socks for their first run, dug my last pair of brand-new-supermarket-cheapy-but-great socks and what do you know? Turns out they are white and purple too.

I’ve never been so co-ordinated!

Sadly though, the washing machine seems to have eaten one of my fantastic new purple socks. How does that happen?

Despite my worries, niggles and moans, as expected Sunday morning saw me up and eating porridge just after 6am. I had finally made my plans late the night before, so unfortunately hadn’t had much sleep. Nevertheless, adrenaline got me up and out of the door by 7.00am. I’d decided to use the Park and Ride as I’d assumed Bristol would be very busy, and as I was good and early there was no problems parking, and even a toilet there (most important on race day!) On arriving at the bus stop, the lady sitting next to me (who looked vaguely familiar) asked if I knew where the bus would leave from to go back to the car park. As we chatted, it turned out that this was the lady I’d talked to at the end of Malmesbury Half a week ago, when I was waiting for my bro-in-law to finish, and she was waiting for a friend. Small world!

We made it safely to the harbourside area which was already bustling, then she headed off to find the ‘other’ start area, whilst I went to find the statue of the dung beetle which was the designated meeting point for a group of Runners World forumites. (Yes – there really is a statue of a dung beetle. I didn’t believe it until I saw it!) Found the statue, grabbed a cup of tea, and over the next few minutes my 3 friends arrived. Always lovely to meet people in real life when you’ve been chatting to them for months online!

We chatted, we queued for toilets, we said our ‘good luck’s and set off. I was to start from the College Green start so found myself passing the start / finish line and then climbing some steps with a crowd of other runners up to College Green. It was very scenic round here, and atmospheric with the cathedral’s bells ringing out. I watched the first wave set off (so I knew where I’d have to go), then dropped my bag and queued one last time for the loo.

As I joined my pen, I noticed that the Yellow and Pink pens were basically just one long queue, which would eventually join onto the back of the Green and Red runners. As I was near the back of my pen, I was basically starting at the very back of the entire race. Queuing up with men who had inflatable crocodiles trapped to their backs should have warned me what was to come.

As with any big race, 10.00 o’clock (start time for the second wave) was marked by a slow shuffle. We shuffled down a hill and round a corner, then we shuffled a bit more until finally we could see the start line, and crossed it at 10.13am. Again, as with any big race, the road was very crowded and the first mile was more start-stop than go go go! As everyone settled down and we set off on the long straight section along the Avon Gorge we could already see runners coming back the other way. As anticipated it was exciting running under the Clifton Suspension bridge, but that was the best bit. At just over 4 miles we did a u-turn and started running back exactly the way we’d just come. The only thing to look forward to was that running back under the bridge would mark round about half way. The road was good and wide here, but I was still finding it hard to get into any sort of a rhythm as I was having to constantly overtake people, weave around others, and check  my Garmin to try and stick to my planned pace of 10:30 minutes per mile.

After the bridge we headed back towards the city centre. At around 8 miles there was an energy gel station, so I took the one I’d brought (as I knew it wouldn’t upset my tummy).  On into the City Centre, with very little support from people in the houses we ran past, no music or bands playing. A couple of the charity cheerpoints had live music which was great to hear. The course wound its way through squares and along back streets and main roads. We seemed to often spot runners going the other way and not knowing the course I didn’t know whether it was runners ahead or behind of us. There were a couple of ‘slopes’ just to catch out the more tired amongst us, and one nasty slope around mile 12 (I think) which did seem to go on forever. More annoyingly though, even more people were walking which meant more weaving and overtaking. At one narrow bridge an entire block of people were walking, with no space to get around them. Grr!

It was amazing to spot my family 3 times – just after the 10 mile point, a bit further on, and then just before the finish. Always a relief to know they’ve managed to get up and out of the house! Very relieved to cross the finish line, great to get another PB by knocking another 1 minute 23 seconds off last week’s time, but also a tiny bit disappointed as I’d hoped to knock even more off.

One pain at the end was trying to get back across the end of the course as we needed to get back up the steps to College Green to collect my bag. Marshalls were very sensibly controlling the crossing, but this did add an extra 5 minutes of standing around and getting cold. Then in order to get back down to the harbourside area for some lunch, we had to cross over again. I did think how much easier it would be if the organisers had transported our bags down to the Harbourside… However huge thumbs up to the staff of ‘Los Iguanas’ Mexican restaurant though, who gave me a free glass of fizz because I was wearing my medal!

So overall, mostly good on the day organisation, with lots of efficient marshals. Atmosphere sadly lacking though. Am I glad I did it? Yes. Would I run it again? Probably not – sorry Bristol!