So another week has gone by, I’m another year older, and I’m still not running. Another visit to the Physio put paid to that!

Actually, there was good and bad news from the Physio. The Bad News is that I can’t run the Bath Half. Fair enough, its in just over a week’s time and I’m still in pain. As they put it, my focus is London, not Bath. I can easily run Bath next year (just need to pay another £39 – eek!)

The Good News is that she could tell I’d been doing my stretches, the pain has moved lower down my leg (apparently this is a good thing – but I’ll have to take her word for it), and is less than last week. This was apparent because I didn’t manage a vertical take off from the couch this week when she pressed on the sore bit. She was impressed with the bruises on my legs from where she’d poked me last week – “like a peach!” she remarked. After running on a treadmill with 2 Physios standing behind me, looking at me legs and making comments (a girl can get paranoid, you know!) the conclusion is that my running isn’t as bad as they thought it would be, over pronation isn’t too bad, and my back was stiff.

Back was solved by more pushing & grunting (the grunting was me!). I have to keep up my stretches, and have been given some more to do. I should keep up the cycling and aqua running (as apparently there are still one or two people in North Wiltshire haven’t had a laugh at me yet). Next week I’m going to be taped up – I tell you, these Physios are sadists!* 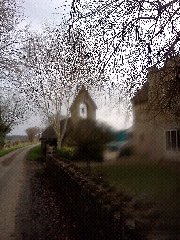 Anyway – out on the bike yesterday for just an hour, as that’s my bottom-pain-threshold. Past a lovely Victorian school building (I think!) Took a blurry photo, then promptly dropped my phone. Sigh!

Today I should be doing my cycle-aqua run-cycle combo again that I first tried last Friday. However, in a classic spot yesterday of ‘retail-therapy-is-still-therapy’ I am waiting in for a delivery which includes PADDING!!!

Maybe I should do some more stretches whilst I’m waiting …..