Many people replied to my rant last week about how sports companies treat women, specifically in running and cycling, After some interesting conversations I thought it was probably time for an update, so here it is.

1. The Proliferation of Pink

I took the above photo at the Nike Store at the Outlet Centre in Swindon last week. This is their Women’s Running section. Black, white, pink. Disappointing, Nike. I tweeted them, but have yet to receive a reply.

@LucyLemonLife who blogs over at ww.LucyLemon.net said “The disappointing one for me recently was the Hind range at Sweatshop. Great idea to have an affordable range but nothing that wasn’t black or pink in the winter range and now the summer range. Ugh.” Exactly, Lucy, exactly.

Remember how I was upset that @SportPursuit had on offer women’s bibshorts manufactured by Italian firm Giordano, and the photos used to show the shorts featured a topless (female) model? Well Sport Pursuit were obviously not impressed with my arguments about why they shouldn’t use such photographs, because they have another sale of Giordana cycling gear. The topless ladies are there again (sigh), and this time they are joined by topless men. If you want to take a look, here’s the link.

I’m sorry, but adding topless men doesn’t make it okay. However if you loved the film Zoolander you will see a fine array of ‘Blue Steel’ poses. And I’m still wondering how the female models are going to get a bike helmet on over that hairstyle.

On to my Trek bike, with it’s unexpected frame decoration

And then, I had a reply from @TrekBikesUK:-

So basically I need to correct my blog about why we have women specific design of bikes. I also need to stress that I have nothing against Trek bikes themselves – I love my new Trek Lexa SL bike and my husband would have his Trek in the bedroom with us given the chance. (No chance!) I am more than happy to believe they spend a shed load of money on research and design.

I was even impressed with the online magazine they pointed me towards. You can see it here  It’s a great read all about  women cycling, pictures of women going down amazing trails on MTB bikes, stories of how the bikes are designed and so on. I was very happy that whoever looks after Trek UK’s Twitter account managed to turn my angry rant into a civilised and fun conversation.

BUT I am still not happy with the ‘Best Friends Forever’ sticker on my bike. I liked Alexa’s suggestion of using white elctrical tape to cover it up until I think of a new slogan. (Still thinking of a new slogan).

I am endebted to @Abradypus, who blogs at Abradypus for pointing me in the direction of this awesome blog post at Total Womens Cycling  Basically Sarah Connelly, the author, showcases the different approaches four companies making women’s cycling clothing have to how their products are advertised. They range from topless bib shorts again (another company, Assos) through to photos of women actually riding in the clothes, looking like they’re working hard, and out with other women having fun. It’s a good read and is basically echoing some of my rants (but written 9 months ago).

The only problem is I am now looking at a great site with fantastic women’s cycling gear, and I can feel my fingers reaching for my credit card …

Be warned. This post is a rant. Maybe not as heated as the great brushetta* rant of 2011 which is still spoken of in hushed tones on the shores of Lake Garda, but a rant never the less. It is also a rant in three parts, so are you sitting comfortably? Then I’ll begin.

Part One. Once I got into running and started buying ‘proper’ running kit (rather than shuffling along in old trainers and jeans hoping anyone seeing me wouldn’t realise I was trying to run) I quickly realised that many companies seem to believe that if a product is designed specifically for Women, it has to be Pink. Pink running tops, pink shorts, pink head bands, pink water bottles, even pink running shoes. When I got home with my latest pair of unfortunately pink Brooks I immediately found a muddy path to run along to try and tone them down.

Now don’t get me wrong, I know there are plenty of women who don’t mind pink, and plenty who adore it and the colour alone will sway their purchasing decisions. I would just like sports companies to appreciate that not ALL women want to dress like an overgrown Barbie doll each time they step outside to run.

And so to part two of my rant – cycling. I have been impressed when looking at all types of cycling gear that companies producing the goods haven’t had the “all women want pink” brain washing. Hooray! I thought – a sport where women are treated seriously as sportspeople and consumers!

Then I found SportsPursuit selling a range of ladies bibshorts made by Italian firm Giordana. 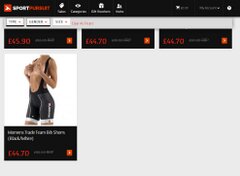 After tweeting tbem, Sport Pursuit told me they were only using the product images supplied by the manufacturer, but after posting the above screen shot on Twitter I know from the responses I got that I wasn’t the only one who was shocked and disappointed.

“I’m a red-blooded hetro male and I’m appalled. How is women’s cycling ever going to be taken seriously with ads like that?!”

“Is this really how women (let alone women in sport) are seen?”

” So insulting to your female customers. Try telling them that’s not acceptable in the UK”

You get the general idea of the tone of the tweets I received. We were ranting in unison. As you might have guessed, I didn’t buy that particular brand of shorts, but instead a fantastically comfortable pair in black with blue stitching, although the padding inside was still PINK. Sigh.

And so to part three, my new bike. Having tried my husband’s bike I was interested ina bike designed more for the female anatomy (our body length to leg length ratio are different, and women are generally narrower across the shoulders). I was delighted that of the two women’s bikes I looked at, neither of them had any pink on them. Both were full of the same technical features as the men’s version, both were light, and the man in the shop assured me I would be fast on them. We eventually chose a Trek Lexa SL, in white with green ‘go faster’ strips on.

My husband also has a Trek bike and has been extremely happy with it. When he was out in the garage ‘fettling’ the other day, he called me out and said “Have you seen underneath your bike?”

Best Friends Forever? BEST FRIENDS FOREVER?!! What is this – a ‘Hello Kitty’ bike? Does Jens Voigt** have a bike with “BFF” on? I doubt it. I suspect his bike has the phrase that is on my husband’s Trek bike “Power Transfer Construction“. Slightly more grown up.

Give me a minute to calm down again.

And breathe. I’m in my happy place. It’s not pink in here.

So – rant over. in fact, 3 rants all rolled up into one. Why can’t sports manufacturers & companies treat women like sports people. Like athletes. In the same way that they treat men. We’re not children, we’re not simple, our bike is NOT necessarily our best friend, we have brains. We also have wallets and credit cards so ladies, let’s use our consumer power to show these companies what we want, and what we won’t put up with.

If you have any more examples of how women are treated different to men when buying sporting products, please do share with me and feel free to join in my rant!

* “It’s just stuff on toast!!! Why does it take 45 minutes to produce stuff on toast” is a precis of what was a very long rant on a hot and hungry day.

** My all-time favourite pro-cyclist who coined the phrase “Shut up, legs!”, who goes geocaching, who has 6 children, who tweeted my son after his arm breaking bike crash saying he hoped he healed quickly, and who just seems like an all-round good guy. He currently rides for the pro team Trek Factory Racing. I need to ask him what is written on his bike.