(Cue Claire Balding)
“It’s a cold morning here at Sandown Park as the runners gather by the paddock,  ready for the off.  Breath steaming in the autumn air,  manes being tossed excitedly,  and fetlocks a-quiver in anticipation of the race ahead. Everyone looks in fine form,  although they seem to have forgotten their horses …”

I am always amazed at the places that running takes me, from knee-high mud in the back of beyond, to pounding the streets of our capital city. I have run around a motor racing circuit, but never before around a horse racing course. On 24th November 2013, at the Running Show 10K Race at Sandown park that was all about to change.

I knew we wouldn’t be actually running on the race course itself (those jumps look big!) We would be running a two lap race, each of which wound its way around various buildings, then ran alongside the race course. A lycra-clad cyclist (demonstrating an impressive power stance) made sure we made a u-turn around a strategically placed bin and headed back the way we’d just come. Being nosy I love seeing ‘behind the scenes’ of, well anywhere really, so I really enjoyed spotting all stables, the yards and especially the horse showers as we ran. Running on the narrow paths, whilst keeping to one side to leave room for the faster (or slower) runners going in the opposite direction meant it wasn’t easy to overtake on this course. However the surprising amount of uphill meant this was never going to be a PB course for me anyway. The knowledge of what happens to race horses who fall was enough to keep everyone trotting along fairly smartly.

After my second lap I puffed and panted my way over the line, received my medal and a cup of water, and then made my second amazing discovery of the day.* Fruit flavoured coconut water is disgusting and should be avoided at all costs. Bet if they gave that to the horses they’d spit it out as well. 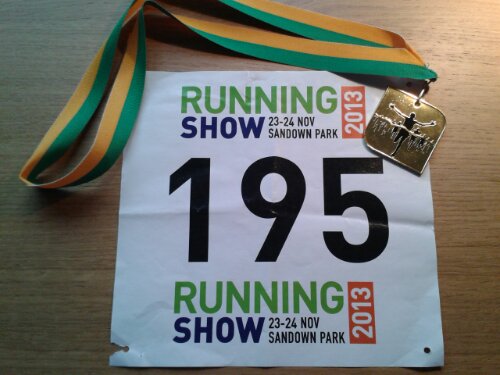 *First was that horses had showers. Who’d have thought it?