So after last Sunday’s mud and bull filled Marshfield Mudlark,  I’d been presuming that this weekend’s half marathon would be a straightforward road race. Starting and finishing in the small Wiltshire market town of Devizes,  the route quickly heads out into the surrounding countryside. The elevation profile showed 4 hills, rave reports from last year had moaned about the hills,  but after my extensive hill training for Marshfield (cough cough) I thought I’d be okay.

Race day dawned grey and damp. I was thankful to wake up from a dream about the race where I got lost in the town centre, so decided to pop into some public toilets, and when I came out the town was deserted, with no marshals or signs to be seen anywhere. Hoping it wasn’t a prophetic dream I set off in good time,  managed to park just across the road from the start area and joined a very short queue for the portaloos. All was looking good so far. I managed to meet up with two online friends from Runner’s World (that I’ve met a couple of times before), and we shivered and chatted before we were summoned to the start line, half an hour before the race started. This was the perfect time for the heavens to open and the rain to start falling. 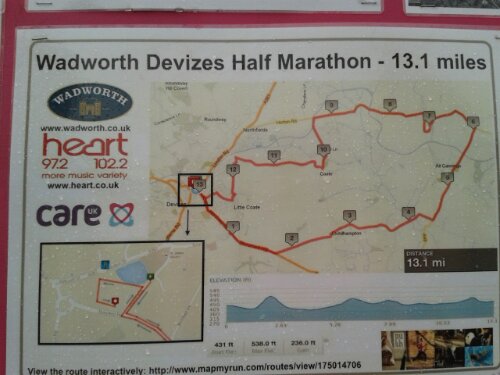 My friends were both aiming for sub 2 hours, whereas I was hoping to get somewhere close to my Chippenham time of 2:13:35, so I was aware that as we got closer to the start time I’d need to shuffle backwards. We couldn’t hear any of the pre-race briefing, we couldn’t see the Mayor who was supposed to be starting the race, but we did suddenly hear an air horn and felt everyone start moving forwards. Whoops – no time to head for the back, I just had to start running. We crossed the start line – surprisingly with no chip timing mat – started our Garmins, and we were off.

My friends disappeared off and I struggled to stick to my 10 minutes per mile planned pace. Runners streamed past me, as I was that annoying person who gets in the way by starting too far forward. As I’m used to starting at the back this was a depressing experience that I won’t be repeating. I was aware I was going off too fast, but decided the first hill would slow me down. The rain carried on falling as we headed out of Devizes on a main road. We headed up the hill, which wasn’t as steep as I’d thought it would be, but it did carry on around a corner which was too much for some people who started walking. The wind and rain was battering down on us now, but at least climbing the hill helped warm me up.

The views from the top of the hill would have been amazing if it hadn’t been smothered in cloud. I did see three White Horses (I think it was actually 2 Horses from three different angles), and we ran through some very pretty villages. Unfortunately the rain was getting heavier, and at one point it felt like hailstones. The side of the road that we were running along gave up being ‘full of puddles’ and moved into ‘small continuous stream’. One house we went past had two canoes outside – it was very tempting…

The rest of the race went swimmingly (sorry). I had a gel at four miles, just before the water stop, and planned to have another at mile 10. I only usually take one gel in a race but thought I’d try two and see if it helped with my stamina towards the end of the race. The next couple of hills were okay, I was soaked to the skin and my legs were feeling stiff. I really wasn’t feeling the love for running at this point, but knew the only way to keep warm was to carry on running.

The Mile 7 ‘Heart FM Cheer Point’ did make me smile. It was in a farmyard, with a Heart FM car with the radio turned up, a man with cups of water and a lady with a large foam hand and a tray of jelly babies. Very Wiltshire!

Eventually I reached mile 10 and took my second gel. Only a 5k to go. Mile 11 – less than one of my ‘short’ runs. One more water station, a sharp turn off the road onto a gravelly track and the last hill. Oh boy -they saved the best till last! This was a steep hill, made worse by the fact it now had a stream running down it making it slippy and very loose underfoot. I started off running but when the lady just in front of me started walking then of course my legs automatically started walking as well. At least there was a steep downhill on the otherside which gave me the impetus to carry on to the finish.

As I came back onto the field, which we had to run around to get to the finish line, suddenly I heard shouting and clapping. My friends had waited and were cheering me over the line. It gave me enough of a mental push to put in a sprint finish. I crossed the line, according to my Garmin, in 2:13:05, another PB by 30 seconds.

Although I was pleased that my friends had waited in the rain for me, I was even more impressed with the marshals who stood out there, in the rain, for hours and hours. They were all smiling and encouraging, and they made a huge difference. Thank you, Marshals, and thank you Devizes. I may well be back next year… as long as my trainers have dried out.