Apparently today is World Vegan Day – it was news to me, but obviously it made it a highly appropriate day for some veganeuring. I really wasn’t feeling it today, I had a day off but could happily have just gone back to bed. I eventually persuaded myself I’d feel much better if I headed outside to do something, whatever it was! I didn’t feel like heading to a cafe so I made a drink, grabbed a flapjack, stuck my bike helmet on and headed out the door before I could change my mind. “Coffeeneuring without walls” is totally a thing, and was made for trips like this. It was probably intended for slightly more adventurous rides, but hey – we all do what we can.

I stuck to quiet lanes after my recent fright at a roundabout, and yesterday’s incident with a 4×4 whilst out running, and found myself cycling along a lane I used to regularly cycle on. It was the long way home from preschool, and in those days I had my chunky 4 year old son on the back who had demanded the “pretty way home” whilst I wanted the quick route home for lunch. Chunky four year old is now a long, thin nearly 6′ tall 17 year old! The bike was the same one I used to ride though – still going strong!

I stopped in a field just off the road, parked the bike up and had a wander about whilst drinking my mocha and munching my flapjack. The sun came out, the birds were singing, and I felt peaceful and calm.

Rather than heading into the village and the busier road home, I turned back the way I’d come. I couldn’t resist cycling right around a triangular junction (because I could) 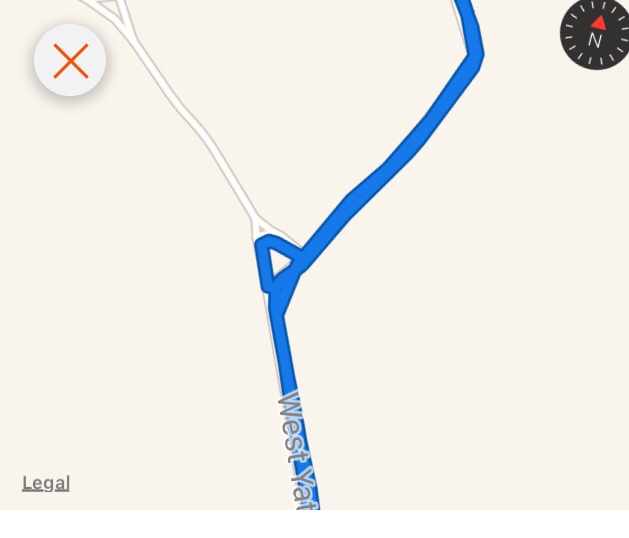 and I even took a slight detour in order to incorporate a hill into my route back. On meeting a car on a very narrow lane I was instantly anxious, but then amazed when the driver pulled into a passing place and patiently waited for me to come past. I waved and shouted my thanks, to which the driver pleasantly replied “No problem!”

My faith in human nature has been somewhat restored.