Warning – this post contains photos of my foot, and is not for those of a nervous disposition. Or a fear of feet. Or physio tape.

Yes the title gave it away. I’ve been to the physio. I am fed up with my foot still hurting and decided that maybe just rest wasn’t going to magically cure it.

I have more or less followed the doctor’s advice after my visit in January in that I definitely haven’t run, haven’t cycled and have barely walked. However, I confess I have thought about running. Mainly when I’ve seen other people out in lycra and I’ve snarled (to myself, not at the runner) and then sulked. Despite this self sacrifice, my foot wasn’t feeling any better and with a ski holiday coming up I was getting desperate.

I turned to Doctor Google and decided I should try taping my foot to try and support the sore bit. Thanks to a lovely running friend, who incidentally is another Lucy, I got hold of some physio tape and set to. I give you exhibit A 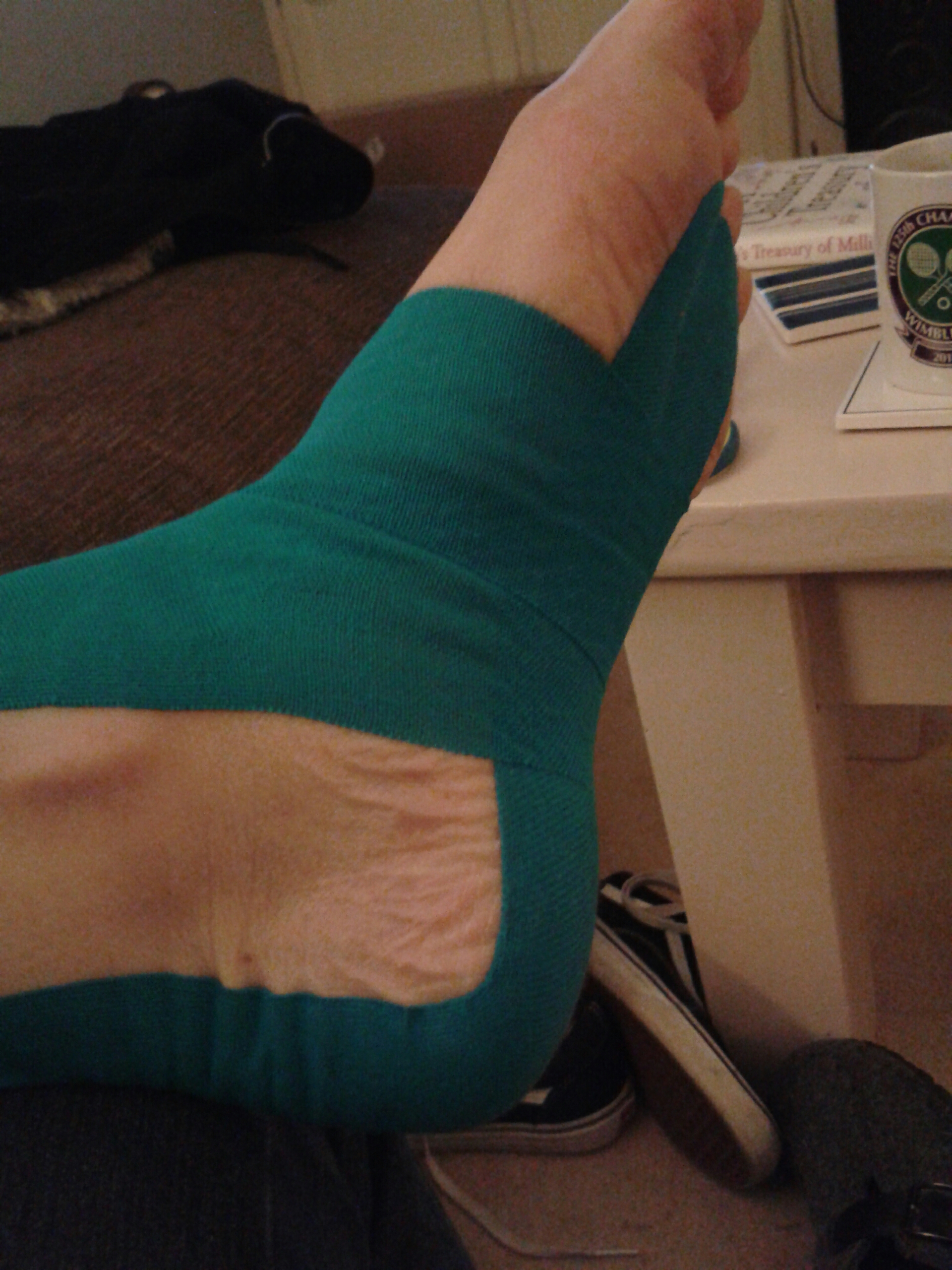 Despite an admirable amount of tape it didn’t help. In fact my foot felt worse

In desperation I rang the physio hoping for an appointment next week, and the Patron Saint of Desperate Injured Runners (St Nike? St Brooks? St Ron of Hill??) must have been looking out for me because they had a free appointment that day. I hastily removed my taping efforts and scuttled down there.

As I squirmed on the table I remembered Physio Phil had Magic Fingers of Pain. He dug into my foot causing me to gasp and bite my lip and even mutter “ooooooOOOOOO!” once or twice. It did hurt – lots – but I’m very British and don’t like to cause a fuss.* Apparently I have collapsed the arch of my foot, and the pain is from all sorts of ligaments that I’ve upset. As well as his efforts to sort things out manually I have to do the balancing on the stairs exercise as often as I can, put ice on my foot for 15 minutes every two hours, roll my spikey ball under my foot whenever I can, and go back in ten days time. Phil said this was far enough away that… he paused at this point, and I continued for him “far enough away that I’ll forget how much it hurt today”. He agreed rather too quickly for my liking. Physios are sadists***, but if he fixes my foot that’s fine by me.

He also did his own version of taping my foot.

In better news, my swimming lessons are going well. I still haven’t drowned (always a positive) and I even got a double thumbs up from the teacher last week. I suspect I still look like a drowning insect but for brief moments I actually feel like I’m swimming. Face in the water, arms and legs flailing, but actually moving through the water. I’ll be back there tomorrow, goggles on face and professional tape on leg.

** Not as impressive as it sounds, as at one point I did moan that I couldn’t do it, and had to be told by the scary midwife that the pain would only stop once I’d pushed the baby out. Harsh.

***I wonder if Physio Phil was a midwife in a previous life?