Back in the UK, my 6th Coffeeneuring ride still had an International feel, as I rode to meet my Canadian friend. (I should point out, obviously I didn’t ride to Canada, she was over visiting her family). We met at “Grounded” in Corsham, which eagle-eyed readers will remember I visited as ride number 3 this year.

We had a lovely chat, and I again treated myself to the vegan dark chocolate brownie. This brownie is so good, as we ordered I said if they didn’t have any we’d go somewhere else and I wasn’t joking.

As we said goodbye, I realised that if I popped in somewhere for another drink, then this ride could still count as a Coffeeneuring trip.

Heading on down the High Street, I parked my bike up and walked back to Previous. This is a lovely little shop, with a tiny cafe upstairs.

I bought a birthday present for a friend and then hopped upstairs for an Almond milk latte. This was very good, and almost kept me warm when I got soaked on my ride back home.

Sunday dawned, bright and sunny, and still I was reluctant to get my bike out. “It looks a bit chilly”, “It’s nearly lunchtime”, ” Want to come with me???” Honestly I was worse than a whinging toddler. It was only the thought of getting my penultimate Coffeeneuring trip of 2018 safely in the bag with still a week to go that got me out of the door.

I headed back to Corsham, and went into their branch of Grounded. 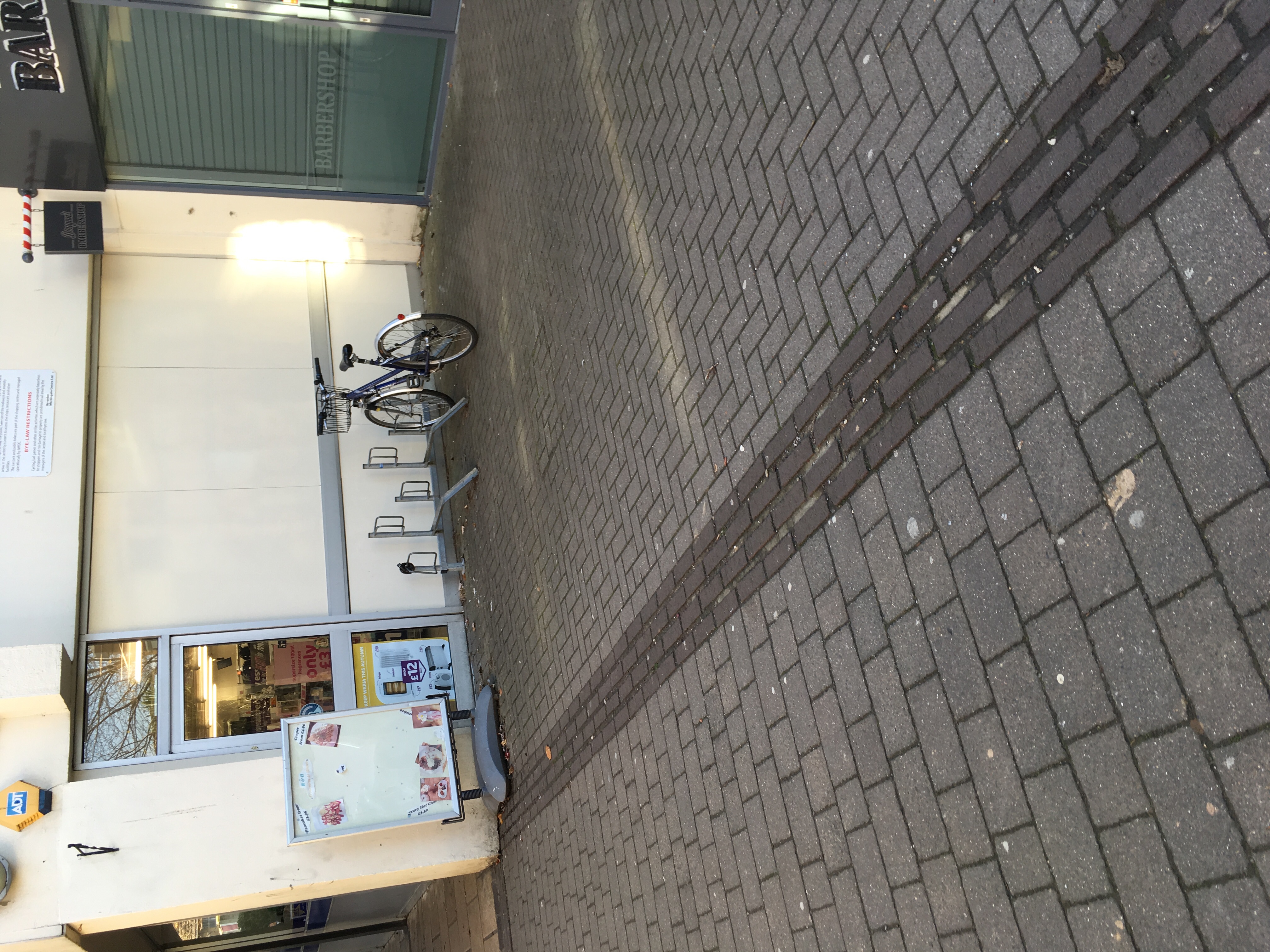 I was too late for the Vegan breakfast (too much whinging earlier!) but I was delighted when they told me they did have a cake that was vegan. Admittedly it was the healthy (and solid!) looking granola bar, but still a cake.

Despite my misgivings regarding where I parked my bike, of course it was fine when I came back to it. I popped into the Co-Op for a few things whilst I was there and then headed back home.

Corsham was looking extremely photogenic in the autumn sunshine, so I obliged and took a photo. Sadly no peacocks today. 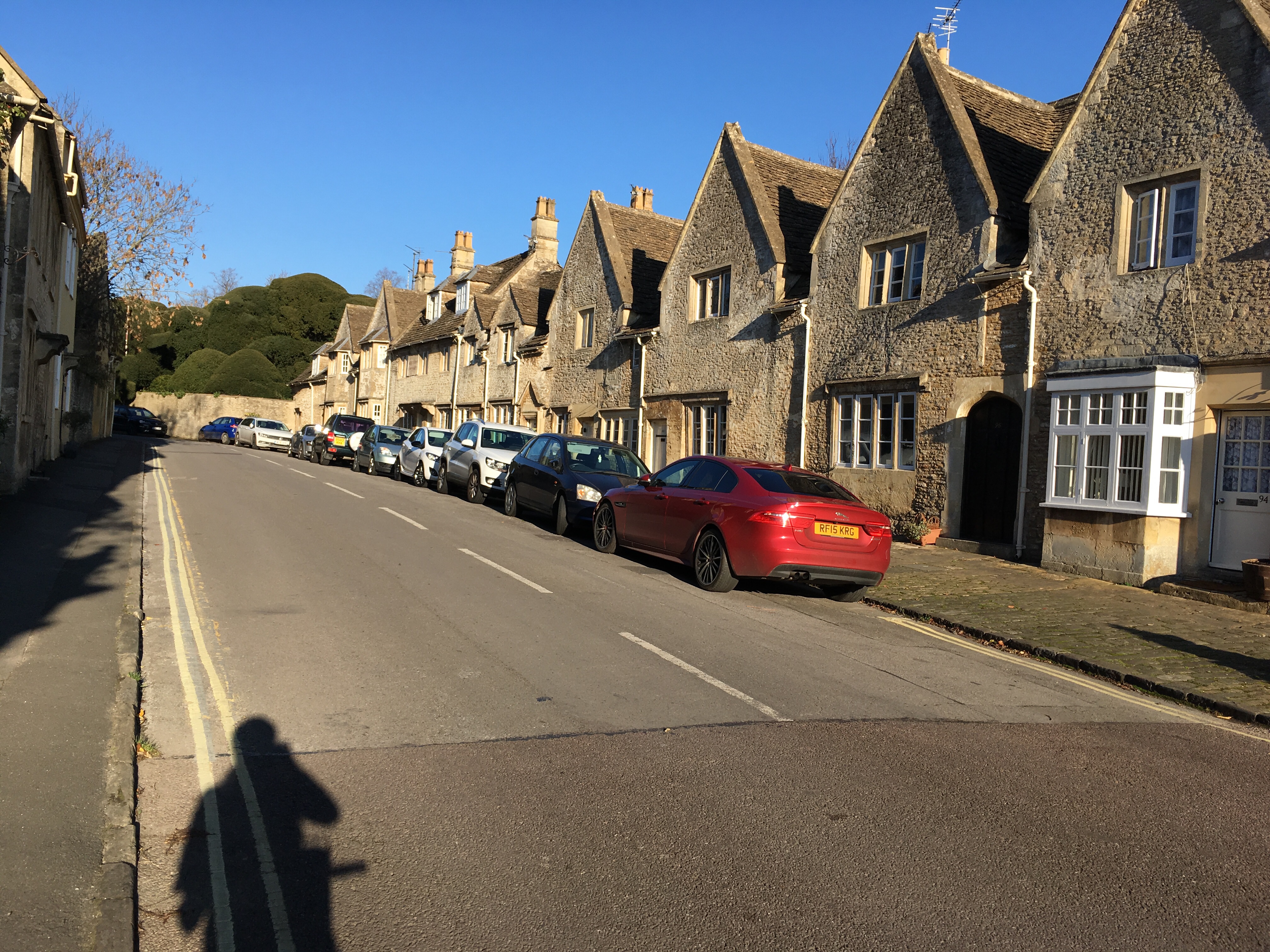 On my way back up Hartham Lane I was struck by the redness of apples against the blue sky – so of course had to stop for another photo. No wonder I’m such a slow cyclist! 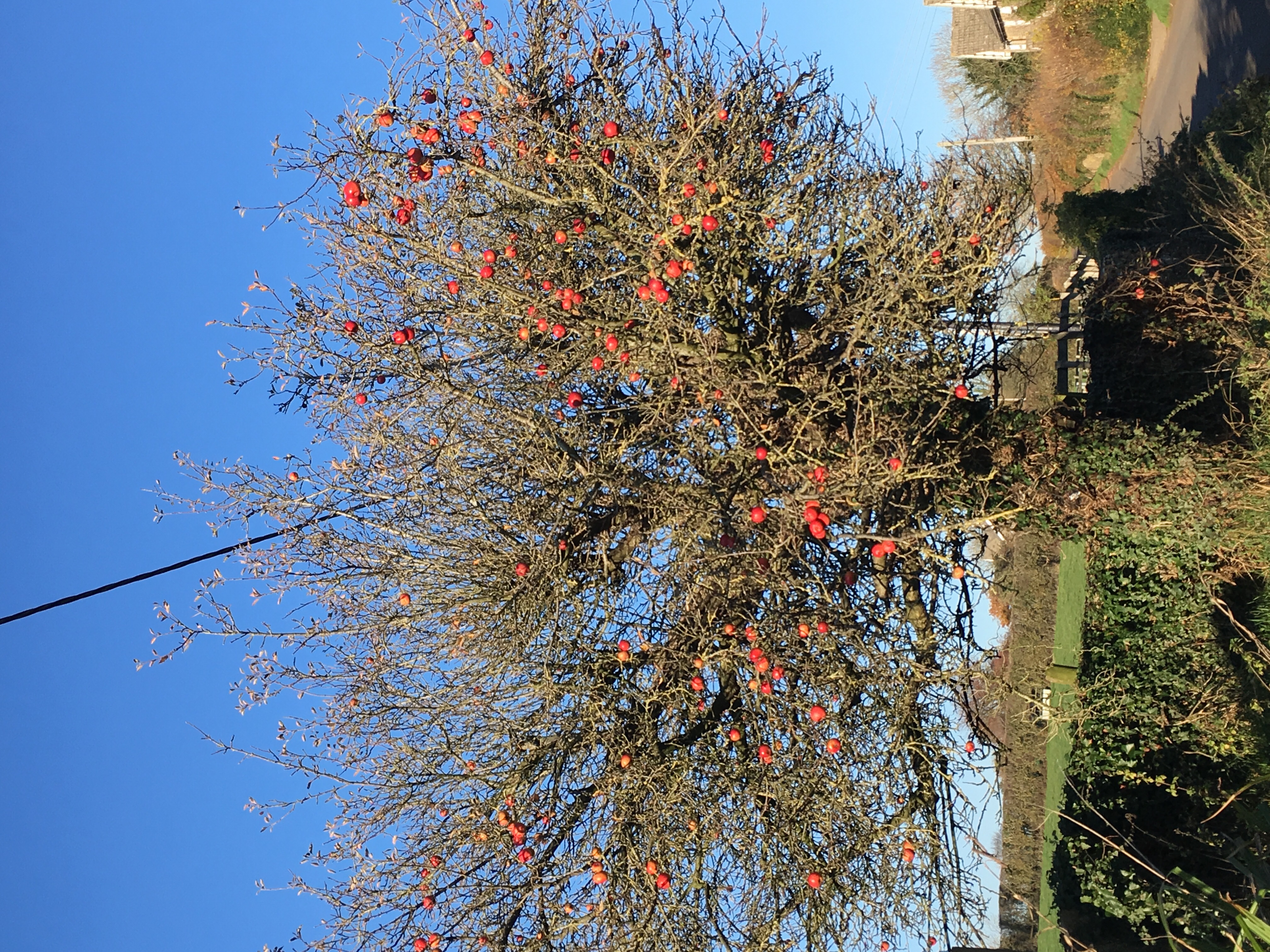 Autumn arrives, and with it – Coffeeneuring! Two years ago I managed to complete the Coffeeneuring challenge and achieved my badge. Last year I miscounted my weeks and sadly failed. This year? Well – it’s another year, another start and I’m keen to be successful again. I’m so keen I actually got my dates wrong and went Coffeeneuring last weekend before the official 7 weeks had even started. I chalked it up as a warm-up ride, and set off for my real first Coffeeneuring trip today.

In case you’re wondering, Coffeeneuring was devised as a way to encourage people out on their bikes for pleasure, particularly after the long “randonneuring” rides over the summer. The full rules, regulations, and guidelines are given here. Actually that makes it sound very official, and it’s not really. Very roughly rides must be at least 2 miles, you should visit a coffee shop (or similar), drink coffee (or similar), and repeat 6 times over what’s roughly a 7 week period. What you must not repeat is the cafe, have no more than 2 trips per week, no more than 1 per day, and your ride mustn’t be part of an organised ride. Oh, and organising your rides with a “theme” is encouraged as well.

With all that in mind, I decided this year I would try to find vegan treats at every cafe stop. On my premature Coffeeneuring trip, an enquiry about vegan cakes was met with a very short “No!”, so I was interested to see how I’d get on elsewhere. Oh – and I’ve named my challenge “Veganeuring “, just to be annoying.

So today, my day off in the week, was the perfect time to start. I had a number of other things I needed to do in town so I decided to go for it and combine everything into one big event. It made for an eventful trip.

Heading into town I stopped to help a lost looking man with a map – a proper paper OS map. I showed him where he was, pointed him in the right direction and set off again, feeling very virtuous. Moments later this veritable Good Samaritan was nearly knocked off her bike at a mini roundabout. Apparently a bright turquoise reflective cycling jacket in broad daylight makes you invisible. Without wanting to dull my halo at all, I should confess that hand gestures were exchanged at this point, but none of them vulgar. That incident made my heart rate spike I can tell you!

I eventually made it to the Leisure centre for a short swim, and then on down into town to a cafe called “Grounded” for my official Coffeeneuring stop. This is a really lovely cafe, with seating both inside and out. It overlooks the river, and has very handy railings outside that I locked my bike to.

I had a very nice almond milk mocha, but sadly they had no vegan cakes. Remembering they serve a Vegan breakfast I was surprisingly restrained and only ordered toast with vegan margarine and jam. I had to laugh -as the waiter brought my order over, he loudly declared “Vegan toast!” I could almost hear the thoughts of the people around me “what’s in normal toast that isn’t vegan??!!” 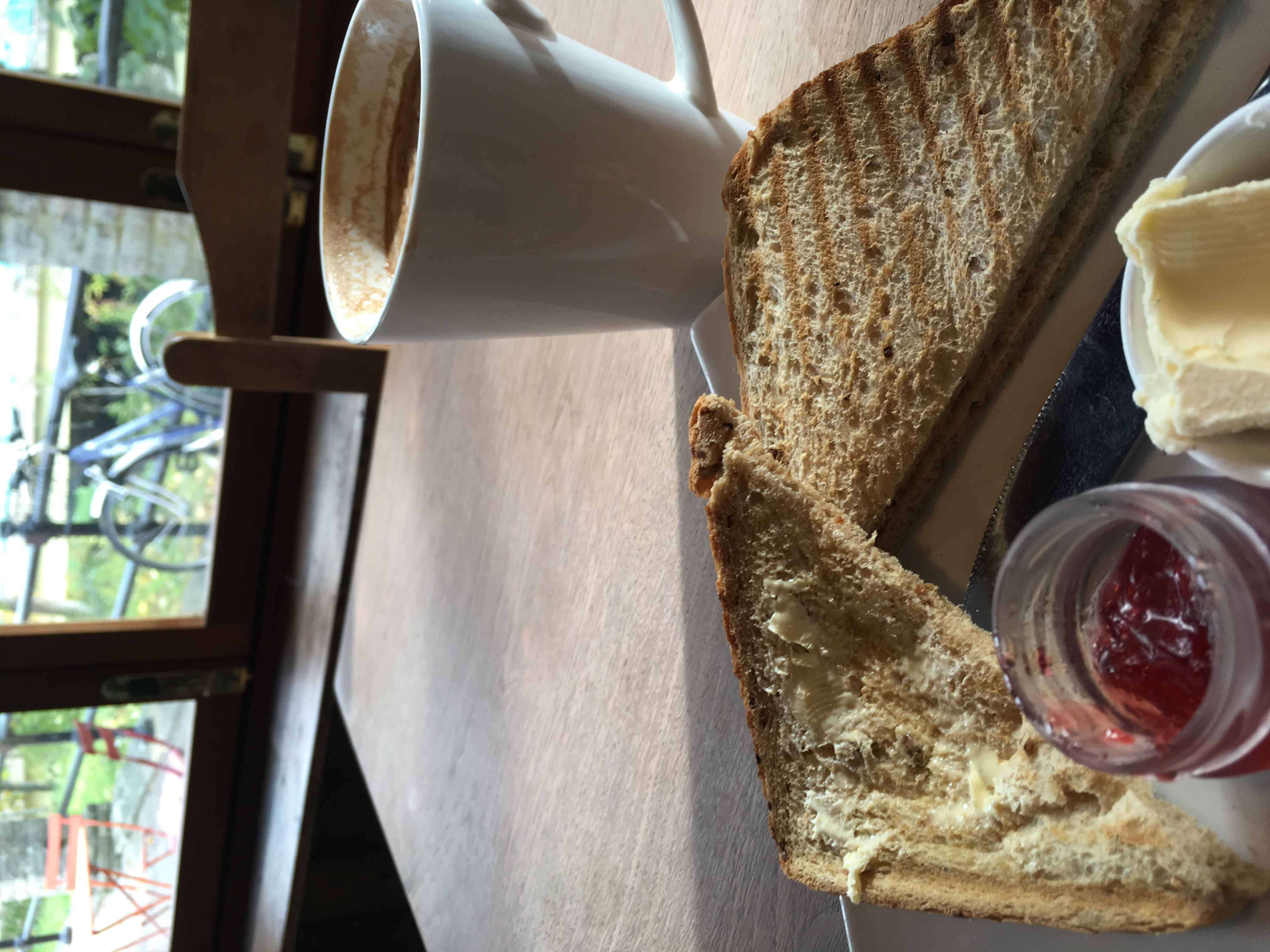 Then I walked my bike up through town to meet my parents. The bike parking on the town bridge was full, which was pleasing but annoying, so I found a good place further up the high street. As I was locking my bike up, I noticed the man I’d helped with his map again. He thanked me once again, confirmed he’d found the wood he was looking for, and asked my opinion on the local coffee shops. I was so pleased to see he was having a successful day out!

Stopping to retrieve a baby’s dropped sock I also met a lady I’ve been seeing around Chippenham for 20 years, but never spoken to. We used to get the same train every morning to work, but being British had never actually talked to each other. We were finally having a lovely chat, stood on the pedestrianised area outside The Angel Hotel, when I was nearly run over by a Range Rover screeching to a halt inches away from me. I was beginning to think I had a target painted on me!

After a cup of tea and lovely catch up with my parents I mounted my bike once again, and made it safely home.

2 slices of “vegan toast” and jam

A dithery moment after lunch on Wednesday 9th November 2016 which went like this:-

I ought to get out and do something.

I could go for a cycle ride.

I could go for a coffeeneuring trip!

I have things I need to do.

I have things I need to buy.

I don’t want to walk around shops in my “clip clop” cycling shoes.

Pop to my closest small town on my shopper bike and in normal clothes so no problems with clip clop shoes, no worries about leaving my bike locked up on the high street (well, less than if I was leaving my Trek) and I even had a basket to put my shopping in!

The plan worked well. I enjoyed my ride, even though my shopper bike (called my “Happy Shopper”) is very heavy and takes a lot of work to cycle up even the smallest of inclines. Never mind carbon fibre or steel, I swear this bike is made of lead. I did my shopping and pushed my bike up the pedestrianised High Street without clip-clopping and locked my bike up in front of some shops.  I don’t like leaving my bike in this particular bike rack, because it’s right by where the ‘youf’ of Corsham tend to hang out, but it was in front of a barber shop so I hoped the two bored barbers would keep an eye on it for me. It seemed a fair swap after they’d got to laugh at me struggling to unwind my bike lock and have it “twang” out of my hands more times that I care to mention.

“Grounded”* was a haven of peace. A converted chapel, you have to pass through the old graveyard to get to it The sight of a peacock poking around the grave stones makes for a bewildering experience if you don’t know Corsham.

Its high ceiling makes an impressive setting for a cafe. I sat down, had my drink brought to me (which was delicious and VERY HOT! Excellent!) and  relaxed. 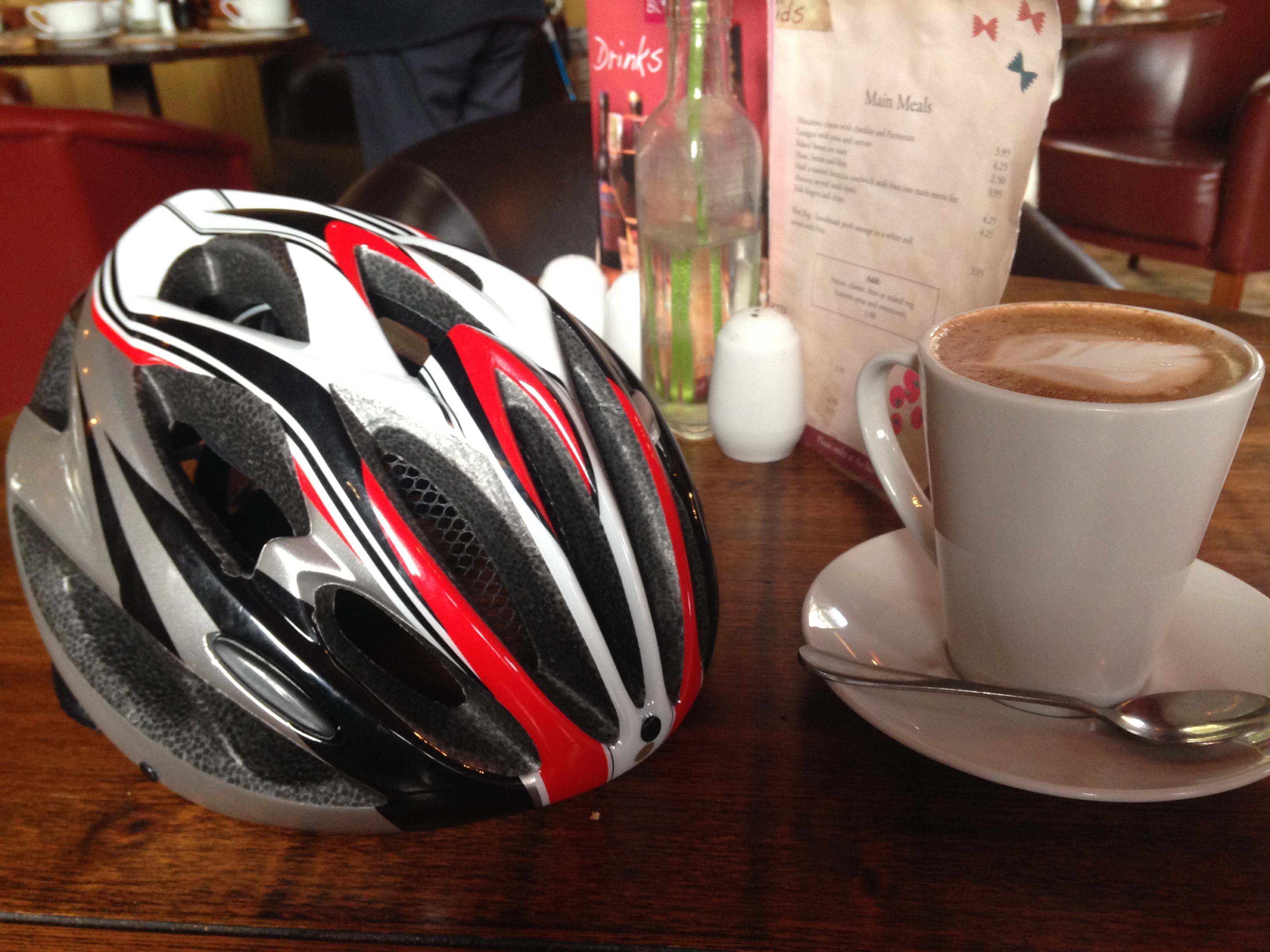 Ahhh! As I left, I told the waitress it had been the best part of my day – and I wasn’t lying.

I stepped out into the gloom, feeling revived and content, only to find it had rained heavily whilst I had been inside and although my bike was still locked up safe and sound, I now had a very soggy saddle to sit on for the ride home. Humpf!