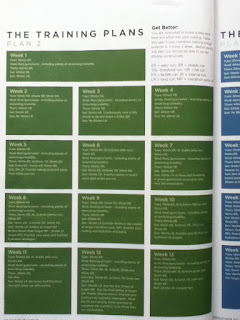 Much as I love having a training schedule, I don’t think I’ve ever anticipated actually starting one as much as this one! I have studied so many different schedules over the last month, most being rejected for not enough running / too scary times and distances / too much walking. Finally settled on the Plan 2 “Getting Better” (!) schedule published in the official VLM magazine. This involves running 4 times a week, which is what I’ve been trying to do since September last year. I figure even if I miss a run, then 3 is still fine for a week.

First run was Monday 2nd January. “30 mins Easy” – not a bad start – even I could manage that! However, thanks to the time off over Christmas even this had me puffing and panting. Tried to run realllllyyyyyyyy sloooooooowly so my heart rate would stay low. I say tried, but there’s only so much walking you can do in a 3 mile loop.

Couldn’t run on Tuesday as the children were still at home, so then had to pack in 3 runs in 3 days. This is not recommended, and by Friday (“60 mins Long Run”) I was shattered. probably didn’t help that I actually ran “60 mins Hilly” as I’ve entered the Slaughterford 9 on 29th January, and reckon hill training might just come in handy!